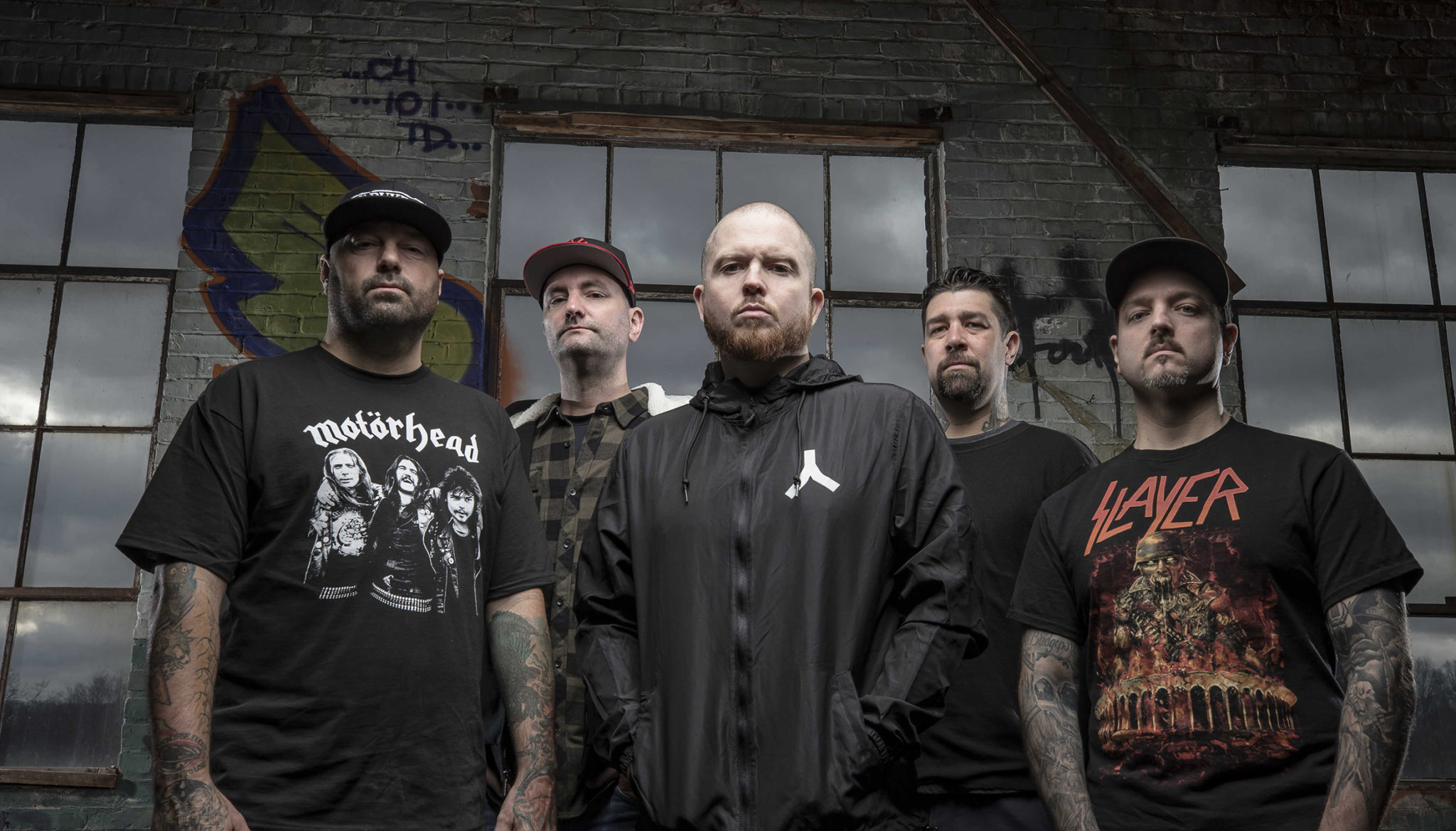 Hardcore kings Hatebreed are midway though their “Decimation Of The Nation Tour”. They are headlining a bill that consists of Born Of Osiris, Hate Eternal, Cannibal Corpse and Unearth. With all of these bands on this tour it is truly the stuff metal dreams are made of. Recently I had the opportunity to catch Hatebreed on this tour and man was I impressed. The sheer amount of energy and passion that goes into their live show is unbelievable. Lead singer Jamey Jasta took a moment out of his insanely, busy schedule to speak with me about the band, the tour and their new self-titled CD.

How is the tour going so far?
Jamey: It has been great. We have a great mixed bill here with all different styles of bands and it has been really great. I think we are dong the right thing as far as getting aggressive music out and with each individual faction of music represented I think it makes for a much better show.

That was the highlight for me. I really enjoyed all the different genres that were represented.
Jamey: Yeah, it is all aggressive and it is all heavy so it all mixes well.

Your brand new self-titled CD was released on October 29th. Now that it is complete, how do you feel about it? Are you satisfied with the outcome?
Jamey: Yeah, I am really happy with it actually. I think it is great when you first go out, start playing the material and the kids are instantly singing along, that is great, and that is what you want. Right now, we are doing a bunch of new songs in the set and everybody is singing the words already. Usually it takes five or six months for that to happen but this time, it has only been a month and it is already sinking in so I think that is a good sign.

How quick are you in the studio? Can you usually knock things out in a couple takes or is it a longer process?
Jamey: This time around, we did a lot of pre-production because we wanted to be super prepared. We did a lot of demos and we changed stuff up before hand then tested the songs live a couple of times beforehand. When we went into the studio, we really just banged it out in three weeks to a month.

What was the writing process like for this CD? Did you guys all write together?
Jamey: Well, I did a lot of the writing last year in November and December and then I kind of resumed writing in January, February and March. I already had lyrics to thirty or forty songs that I had written prior to hearing Chris’s stuff. So it was cool to kind to fit the lyrics that I had over some of his stuff.

The new material is significantly heavier and more aggressive than your previous releases. What brought on this newly envenomed attitude?
Jamey: We just wanted to make it a little more in your face than what Supremacy was. We used some of the same formulas that we used for the first record. We wanted to have some of the same song structure as that record. With this record, we did whatever we thought felt right and we added solos and different vocal parts and put an instrumental on there as well. We tuned down more on a couple of different songs and we just tried to make it interesting for us.

What kind of preparation goes into your live show?
Jamey: This time out we went back and made sure we listened to all of the records and made sure we were playing everything just like it is on the album. We fixed a lot of the nuances here and there that we had changed for the live setting. We learned while we were doing the editing of the DVD last year that we were playing some songs a little bit differently so we just decided to go back and learn the songs from each record and be prepared to just pull them out without a set list. So now, we have just been pulling them out. If someone yells play, “Facing What Consumes” we know it, we practice it, it is there and we throw it into the set.

So you do not have a set list every night?
Jamey: Not anymore. We did for the first five or six nights but now we are just going off the cuff. It is fun and it keeps us on our toes.

What are some of the songs you get the best audience response to?
Jamey: Bringing the Rise Of Brutality songs back into the set has kind of reinvigorated that record. Now that the record has really sunk in and people have revisited it, we play about seven or eight songs from that record. “Straight To Your Face,” “Doomsayer” and “Live For This”; people go crazy for these songs now. This has been good because I feel that this was one of those records where the singles were big and they were always in the live set but now people want to hear the rest of the songs as well.

All of that passion that you play with must be tough on you physically. How do you prepare for the physical demands of a tour?
Jamey: On this tour, I really have been trying to get more sleep and stay hydrated. I have been trying to eat better by laying off of the pizza and the Taco Bell. The Hate Eternal guys have been working out everyday so I am going to start working out with them now that my schedule is a little less crazy.

How is the current economic slump affecting your band?
Jamey: Some shows have had less people but it has not had a huge affect on us. Definitely, it affects album sales and everything but we feel like we are putting out a product where people are going to feel like it is worth their ten bucks. We are thinking about doing a bunch of shows next year and maybe lowering the door prices, depending on the economy. I feel the tour package that we have now is good. People feel that it is worth the money; we have five national headline acts for one price. We just want to offer more bang for the buck. It is tough out there, we hear it every night. People are losing their jobs, their houses are in foreclosure and there is no extra spending money for tickets, CDs and merch. It is understandable and we just hope everyone comes out of it okay.

You are right. The first thing that usually goes when the money gets tight is the money spent on entertainment.
Jamey: It depends, some of these shows have been the biggest we have ever done. In certain cities like Charlotte, North Carolina where we have never been a really big draw, this time around, we had like seven hundred people show up. Even a couple of places we do not normally go to had good turnouts. For us, we thought this was great.

When you have some free time and the band is off the road what do you like to do?
Jamey: I just try to get in family time. My grandparents are both ninety and I got to see them when I was off this last tour for like two weeks. I also have a ten-year-old daughter that takes up most of my time.

You guys going to be on the road for Thanksgiving as well?
Jamey: Yeah we are on the road and won’t be able to see our families. It is what it is you know. I have missed six out of the last eight Thanksgivings.

Are you actually playing on Thanksgiving?
Jamey: No, we are taking it off and we are going to go to San Francisco and sit down and have a dinner with the band and the crew. We are all going to go out with the Cannibal Corpse guys as well.