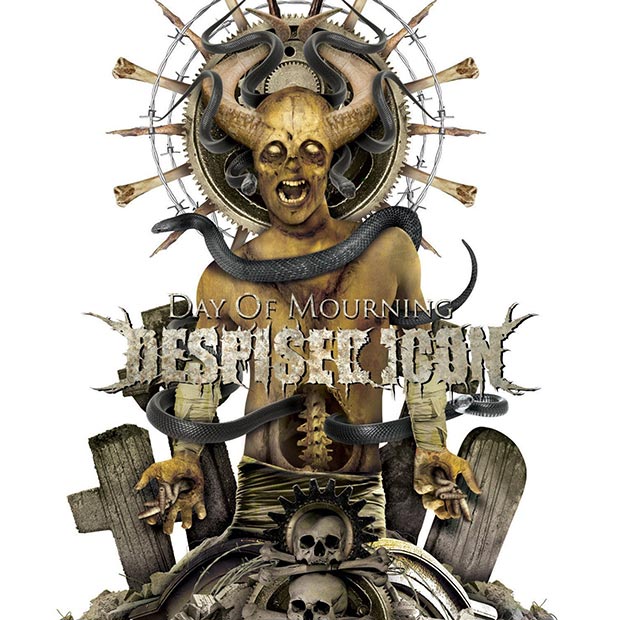 What band has two growling vocalists? Despised Icon would be the answer. Being icons of the Quebec Deathcore scene, Despised Icon has returned to this, their new album, Day Of Mourning; their fourth full length release to date.

This record is similar to past Despised Icon efforts in that it is ten tracks of pure Deathcore. Alex Erian still presents his mid level shouting while Steve Marois brings his low growls. Alex Pelletier’s drumming consists of double bass, breakdowns and blast beats while Eric Jarrin plays heavy guitar riffs which switch over to alternate pickings and also palm muted breakdowns.

The main difference between this album and previous works are the new members. Ben Landreville (Camilla Rhodes, (the) Plasmarifle) shares guitar duties and plays a similar style to that of Eric Jarrin. The other new addition is Max Lavelle (Burn In Silence, Compost Pile, Trauma Concept, Lecherous, Goratory) who takes on the bass role. He ties together the guitar with the drum tracks, helping to keep the rhythm of the songs while ensuring they stay heavy.

While the music has remained similar to their previous releases, Despised Icon fans will not be disappointed by this release. It has all the elements fans have already grown to love, giving the band more material to play when they perform their heavy hitting sets on stage. The album has me pumped to see Despised Icon again when they next come back to my area.

Day Of Mourning is definitely similar to previous Despised Icon albums. It retains the same tried and true formula, so past fans won’t be disappointed. This may be a fault though as the band doesn’t seem to try anything new. This is a group that has kept its roots and probably will never stray far from them. If you want to hear other bands from the Quebec deathcore scene, try listening to: Ion Dissonance, Beneath The Massacre, The Last Felony and label mates Cryptopsy.  [ END ]