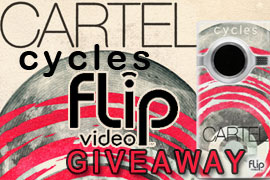 Brief Bio: Twenty seconds into “Let’s Go,” the opening track on Cartel’s third full length Cycles, singer Will Pugh declares, “I’ve got so much left to do but I’ll start with this song.” For the Atlanta, GA pop-rock quintet to be prioritizing, to have their collective gaze so firmly focused on the horizon, the future and all its possibilities is both incendiary and inspiring. Incendiary and inspiring as this, after all, is a band that has toured the world over, from Tokyo to Toronto, from Brisbane to Bristol, had a smash single in “Honestly,” has had over 36 million MySpace plays as well their own MTV mini-series chronicling the recording of their second album and has amassed coverage in Rolling Stone, Alternative Press, USA Today, and the New York Times. Cycles could have easily been the staid soundtrack to a victory lap, but rather than rest on their laurels and bask in the comforts of history they chose instead to go forth, to grow, to cohere into a singular unit (fused together through dedication, perspiration and elbow grease) and, over the course of the eleven tracks that make up Cycles, to create a sterling collection of hook-laden modern rock, succinct and self-assured.  [ END ]

Prizing:
In celebration of their recent release, Cycles, Cartel and PureGrainAudio want to give one lucky fan a “picture personalized” flip cam along with a merch pack including a signed album, t-shirt, and band poster. Enter now for your chance to win!