Set Your Goals’ debut full length Mutiny! made it pretty easy for me to get into them. The record was punk enough, fast enough, catchy enough, and lighthearted enough that the few flaws that existed (namely, weak lyrical content and some misplaced vocal delivery here and there) were easily forgiven. So many songs on the band’s new release This Will Be The Death Of Us take these same principles to a higher degree, making nearly half the record extremely fun and engaging; but they’ve also gone pretty far south with some of these tracks, making for a record that bobs above and below the waterline of mediocrity.

The first half of the record is where most of the “good” can be found. To say that “Summer Jam” is perfectly titled should give you a good enough idea of what makes it great. The guitar leads are thick and melodic; the drums are dynamic and bouncy in perfect pop-punk fashion; the dual vocal delivery is tight, all leading up to an explosive sing-along chorus. Truly a highlight for a band with so many to their credit already. The following track, “Like You To Me,” is a lot of fun, too, keeping those same aforementioned ingredients, but taking things a bit more seriously that its predecessor. “The Fallen…” is the record’s pinnacle – intense, driving, and so deliciously memorable. While the lyrics are a bit transparent (despite the ambiguity they’ve tried to give it in recent interviews, the track is specifically about their departure from Eulogy Recordings), they’re delivered passionately enough that I don’t mind singing along. The song also boasts a perfect example of the “cut-to-half-time” trick that, when tastefully employed, can make a pop punk cut all the more killer.

Then we get to the garbage – and in a hurry. “The Few That Remain” is juvenile in every sense – painfully boring power chord chugging and a very irritating vocal melody throughout the verses. While it likely could have been written off as just a skipper on an otherwise good record, bringing in Hayley Williams from Paramore for a ridiculously goofy interlude and “rap” (sorry HOVA) turns this one from skipable to laughable. An attempt at hardcore in “Gaia Bleeds” isn’t too bad at first (the instrumentation certainly works), but the vocal delivery from everyone not named Jon Gula gets old fast – like a 9th grade Bane cover band – making Gula’s delivery sound totally out of place.

Things don’t get much better until the closer, which does a good job of capturing some of the skatepunk influence more prominent on Mutiny!, but with a relatively flat chorus. There’s a lot to like here – don’t get me wrong. The skinny vocalist – whatever his name is – is more often than not the weaker of the two, and rarely does he make the dual vocal approach worthwhile (“Summer Jam” and “The Fallen…” being notable exceptions). As much as I wanted to get into this album, especially to close out the summer, it just wasn’t happening. Set Your Goals show they can still offer up some great tracks on record, but as a whole album, this one’s just “okay.”  [ END ] 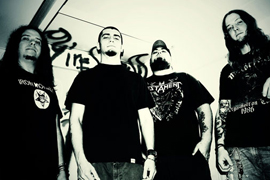 Alice in Chains: “A Tale of Survival”