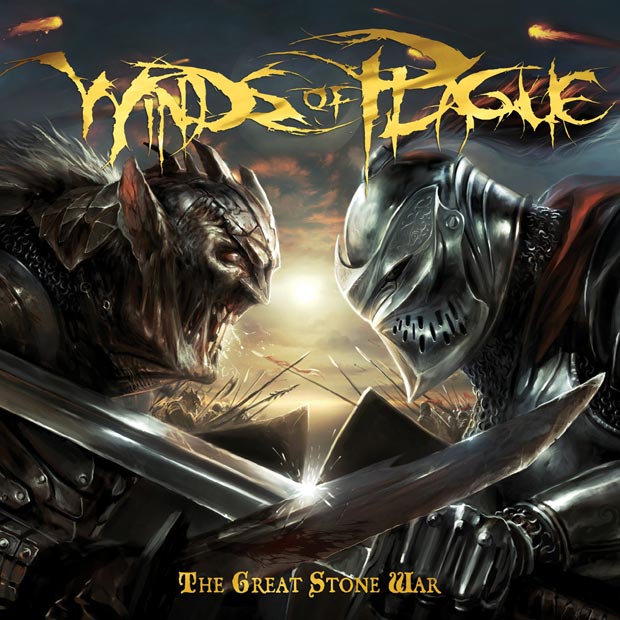 After a few lineup changes since their last record Decimate The Weak, Winds Of Plague are back with their latest offering, The Great Stone War. This album debuts their two newest members, drummer Art Cruz and one of the “Hottest Chicks Of Metal” Kristen Randall on keyboards.

The Great Stone War is a concept record. As stated by vocalist Johnny Plague; “The idea of The Great Stone War is that civilization as a whole will digress and in time inevitably end with one final battle. This battle will not be fought with technology but with stone. Over the course of eleven tracks the listener hears about a journey foreseen through the eyes of a heathen in a religious world apocalypse. Even in the world’s darkest times you always have to take a step back and see life for what it is and not lose sight of what is most important.” Despite what you read, the record has a positive message; to keep close what is most important to you.

The album begins with an intro track called “Earth” narrated by Father Peter Cronin, who happened to be some of the band members’ English teacher. His narration explains the concept of the album ultimately leading into the second song “Forged In Fire” which starts up with the familiar heavy guitar riffs and double bass poundings followed by sweet Johnny Plague screams. The album, using the heavy riffs and breakdowns, is consistent with previous work, yet this new record offers certain changed elements creating a more hardcore/punk feel. This is most notable in the song “Battle Scars” which brings back a bit of the old hardcore.

Changes aside, Winds of Plague have also maintained their symphonic keyboard elements which has become a staple of their signature sound within the hardcore scene. There are also some notable vocal differences. For example on the track “Forged In Fire” some vocal tracks are done by Terror guitarist, Martin Stewart and on the last song “Tides Of Change”, the vocals are performed in a much different and ‘normal’ singing style.

Overall, The Great Stone War is another step towards breaking down the walls of Deathcore. Old fans of Winds Of Plague will enjoy this titan of an album, along with fans of Abigail Williams, Suicide Silence, Bleeding Through and The Breathing Process.  [ END ]