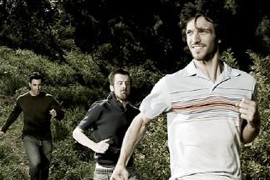 the Skinny: The Greening, an experimental psychedelic power-pop band from Northern California, will release their latest EP, (She’s So) Electric, on September 29 (ZaiRecords). Marking the follow-up to their 2003 debut EP, After Shoal Parlor, features four blisteringly catchy tunes and an encoded animated video for the single, “Sunday Afternoon,” directed by renowned local artist/animator Danny Ochoa. It was recorded at a private studio in Marin, and was produced and mixed by guitarist/vocalist Will Loving. On (She’s So) Electric, The Greening – singer/guitarist Will Loving, keyboardist/vocalist Karl Meischen, drummer Nick Tatro – accomplish their mission again, delivering songs whose pop sensibilities are matched by their underlying attention to detail. With stronger vocals and a more solid sound, songs like “(She’s So) Electric” and “Sunday Afternoon” detail the bands’ continual evolution. While swathes of delayed resonance float between snare cracks and vocal lines, the compositions never fall apart, rather, coalescing into original numbers as unique as their San Francisco home base. With their eccentric synergy coming to the forefront once again, listeners are left with a feeling reciprocal to the band’s – a feeling of curiosity.  [ END ]