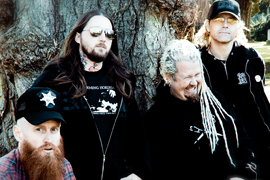 the Skinny: Martha Splatterhead returns! The pioneering kings of Splatter Rock The Accüsed are back from the wrong side of the grave! Accüsed axe slinger and founding member Tommy Niemeyer has resurrected the unholy Splatterbeast with a new lineup that is an efficient killing machine! Originally formed in 1981 near Seattle, Washington The Accüsed have released over 6 lps and several EPS over the last 28 years. Their debut album “The Return of Martha Splatterhead” was the very first release on Earache Records (MOSH1) back in 1986. In the late eighties The Accüsed reigned supreme and were regarded as one of the most important groups of the punk and metal crossover explosion. The true Return of Martha Splatterhead is upon us! Over the last few years, surviving deaths, trends, and severe obstacles The Accüsed have returned to rightfully reclaim the Thrash Metal throne! The new album “The Curse of Martha Splatterhead” contains even more face ripping riffs, more brutal throat shredding and more intestinal morbid devourement than ever before. 14 songs clocking in at 29 min. FASTER, MORE VICIOUS, MORE BRUTAL than you can handle! Crushing production courtesy of Billy Anderson (Melvins, Neurosis, Eyehategod, Brutal Truth, Sleep etc.).  [ END ]