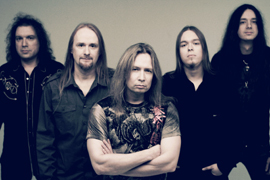 The classic heavy metal band Statovarious is back with a new CD, Polaris, and a brand new tour. Polaris is a terrific metal album complete with big glossy productions, big melodies, great guitar playing and catchy tunes all of which lend themselves to the live setting. Recently, we caught up with bassist Lauri Porra and chatted about Polaris and life ion the road for this metal outfit.

Every band has its musical influences. What are some of the other bands and artists that have greatly influenced you guys and your music?
Lauri: We are 5 different people and we like a lot of different stuff. You can hear some influences of older bands such as Deep Purple or Rainbow but Stratovarius has always been adding musical influences from all around for instance classical music, modern metal, Finnish Schlager music and film music. Influences can be found everywhere.

If you could jam with any famous musician, dead or alive, from any century, who would it be and why?
Lauri: I am happy jamming with the people I play with. It would be nice to hear Bach or Mozart improvise. I would not take part; I’d just be listening in awe.

What was the writing process like for this CD? Did you guys all write together? How long did it take?
Lauri: Everybody wrote something on their own and then we came together with all the different stuff that everybody had and molded it into a Stratovarius album together. The whole progress took about a year. Basically half year writing and the other half recording.

Give us some insight into the record Polaris and the meaning behind its title?
Lauri: At a certain point things didn’t look so good in the band and I think we were all lost and didn’t know whether or how we could continue doing it. The Polaris symbolizes for me the light that guided our way out of this darkness to a better and more productive future as a band. As you might know Polaris, the North Star is the brightest star in the sky and it has guided the northern people as long as they have existed. It seemed like a suitable new symbol for a band born again and found its power.

Are there any songs on this record that are personal favorites or that have good stories behind them?
Lauri: I like the versatility of the album there are some classic fast tracks such as “Forever Is Today” or “Blind.” Some mellow symphonic stuff such as “Winter Sky.” Some epic stuff such as the “Emancipation Suite” and some more modern progressive stuff such as “Deep Unknown.” My favorite song from the album changes depending on my mood.

What is the hardest part about being in a touring metal band and what is the biggest obstacle your band faces?
Lauri: I love being in a touring metal band. To be able to travel the world and play the music you love to people is and honor and a privilege that no one should ever forget. Obstacles are mostly in the current state of the music business, it’s very hard to make a successful album today as the amount of people buying albums is rapidly declining due to illegal downloads. Soon it will make no sense to make any albums anymore. Also the current economical climate is hard when touring as people have less money to spend on concert tickets and a lot of festivals and tours are not making the profit that they need for it to make any sense in doing them.

What can fans expect when they pick up a copy of Polaris?
Lauri: A solid power metal album with some progressive and symphonic elements.

How does your live show differ from your recordings?
Lauri: We try to keep our live setup pretty raw so we don’t use any backing tracks or anything. Everything you hear is what we play. I would say you could expect more raw and down to earth rocking band than some of the bands in our genre. We like to have the approach of the old hard rock and metal bands such as Deep Purple, when playing live. We also occasionally add a bit of show elements such as a solo spots and an acoustic number.

When you are on the road for a while I am sure you see and experience many different things you might not even have known existed. Are there any stories that stand out in your mind as being exceptionally strange or odd?
Lauri: When traveling in a rock band there is always all sorts of weird stuff happening, most of it better kept a secret. One classic “rock moment” for instance was provided by our keyboardist Jens Johansson when he demolished a toilet with pyros once in Hungary. I make some small video clips during our tour and put them in Youtube. If you are interested in the current happenings of Stratovarius offstage check out my Tour in progress series of videos at www.youtube.com/lapaporra.

The public perception of life on the road differs greatly from the reality of it. Can you tell me a little bit about how you travel? (Bus, Van etc…) What accessories do you equip your ride with to make the time go by? What are the living arrangements like while on the road?
Lauri: Our band has it quite good on the road, we try to put some money and effort in making the traveling as comfortable as possible to a band in our level. We do not do first class and private jets but we try to have nice buses and clean hotels. I always have my computer and a mini-studio with me when I am on the road so I can work with new music or some other stuff such as scores for TV and movies I also do. Also, books and iPods travel with me recently I bought a Nintendo DS so I’m maybe trying to waste some of the hours on a long flight with that. I also like doing a bit of tourist stuff when I am touring. Checking out some sights or museums and maybe trying to find a good local restaurant.

All of that passion that you play with must be tough on you physically. How do you prepare for the physical demands of a tour?
Lauri: The tricky thing is trying to stay in shape on tour as there are a lot of opportunities to succumb into the usual partying and eating fast food routine. Let’s see how it goes on this tour. Sleeping when possible is essential on the road.