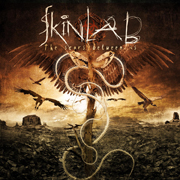 Skinlab – “The Scars Between Us”

Skinlab will be releasing their first studio album in seven years on September 15th through Stand and Deliver Records. Damn if this is not one heavy-as-hell, fast-as-lightening, balls-to-the-wall CD. When I first began listening to The Scars Between Us I was completely taken aback (I was honestly not expecting it to be this heavy and ballsy). However, once the disc got going, I found myself being beat-up and trampled upon by a torrent of powerful guitars and drums that at times were so intense it seemed almost unreal.

“Wolvesblood” is absolutely my favorite track on the disc because it is so intense and drives so hard and is guaranteed to get your pulse up. I really enjoyed the tune “Still Suffering” as well but for a different reason; this song as a whole is a lot slower and more menacing sounding than the rest of the disc and contains, what I think are some killer guitar leads.

The downside to this disc however is that I feel that the brash vocals at times were a bit too much for my liking. That and the music itself seemed almost too unrelenting. It all would have been easier to digest if there we more diversity and/or softer or more melodic parts scattered throughout. All in all the disc is literally a 50 minute wall of heavy.

The Scars Between Us is not genre-defining by any stretch of the means, but it is a very solid Metal record that is sure to please those who like their music SUPER-heavy. Fans of the extreme metal scene are going to want to check this release out. After all this (both in between releases and as a band) these guys can still play. The disc is powerful, heavy as shit, and just may be what you’re looking for.  [ END ]