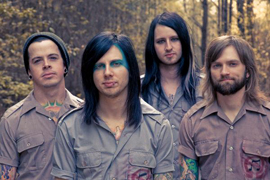 Rock fans rejoice! Tooth & Nail Recording act Showbread are back one again with a hard-hitting record guaranteed to please rockers everywhere. Showbread’s eagerly awaited new release, The Fear Of God, does not disappoint and while it retains the band retains their unique sound; their development as musicians and songwriters is unmistakable. I recently spoke with lead singer Josh Dies about the band and their message.

Different groups have unique ways of writing their songs. How do you guys go about writing your music? Is it a collective effort or is it more the efforts of one particular member of the band?
Josh: For us, it always starts with me writing the basic idea of the music and then bringing it to the group. From there we’ll decide how far the song has to go, sometimes it means a lot of work with a lot of contributions from everyone and sometimes we decide the song is good the way it is.

Every band has its musical influences. What are some of the other bands and artists that have greatly influenced you guys and your music?
Josh: The biggest influential turning point four our band was when Refused released their album The Shape Of Punk To Come. For a while it was the yardstick by which we judged how awesome things were. After a while we started to let our other major influences come through stronger like Nine Inch Nails, Weezer and Flaming Lips. Underneath all that there’s mostly a classic rock and punk foundation from growing up with bands like Aerosmith and Descendents.

The name of the band Showbread is interesting and sounds as if there is a story behind it. Where did the name come from and what is the story?
Josh: Showbread is a biblical reference to consecrated bread kept in temples in the Old Testament. We named our band that because we started as a church worship band. When our church disowned us for dabbling with punk rock we knew we still wanted to be a band with a mission statement. We kept the name as a reference to an argument that Jesus made against traditionalism where he used eating the holy bread (against the rules) as an illustration that doing good is more important than rituals and tradition.

Now that your brand new CD, titled The Fear Of God is complete how do you feel about it? Are you satisfied with the outcome?
Josh: Absolutely. We all feel like it’s by far our best record. We’ve never used fan reaction or critical response as a means to judge our records because frankly it doesn’t matter to us in the least. We make the record we believe in and feel led to make, some people love us for it and others hate it.

Give us some insight into the record, The Fear Of God and the meaning behind its title?
Josh: The title comes from an idea that the record references several times. Many people who hold no faith or no belief system argue that belief and religion are crutches for the cowardly. They think it’s more comforting to believe someone is out there and we go somewhere when we die than to accept the possibility that there is no deeper truth to anything. I think the opposite is true. Believing in something, in this case Jesus Christ, comes with dramatic ramifications that require one to turn their life upside down, deny themselves and become a servant to everyone, treating everyone else better than himself or herself. To me, the consequences of belief are scarier than the consequences of unbelief.

The band keeps things interesting thematically. Can you talk about some of the subjects you tackle on this record?
Josh: The record runs with the theme of insanity. As a band who believes that nothing matters except the deeper truth and that the deeper truth requires us to treat everyone better than ourselves, love and serve our enemies and let go of everything we know, it’s easy to see how these ideas seem insane in a traditional human mindset. The record embraces that and says, “If this is losing your mind, then let it go!” On the other end of things it examines the idea of belief in such a broken world and looks at the frequently asked question “If God is so good, where is he?”

What is the hardest part about being in a touring band and what is the biggest obstacle your band faces?
Josh: The hardest part is probably the instability of it all. We tour and play music to tell people what we believe so we keep going regardless of certain important factors. We don’t make a lot of money and often it’s a struggle to make things happen. Playing music in a time where music is almost irrelevant, piracy reigns supreme and audiences have more interest in trends than they do in credibility is trying. If it weren’t for our mission statement we’d just puke on the whole idea of music and quit.

When you are on the road for a while I am sure you see and experience many different things you might not even have known existed. Are there any stories that stand out in your mind as being exceptionally strange or odd?
Josh: Being a band for 11 years and touring full-time for 7, there really isn’t much we haven’t seen at this point. Our minds are one blur of insanity.

What has been the most memorable moment of your career so far?
Josh: The times when someone says to us “This made me rethink my life” or “This is the moment things changed for me” are the memories we hold on to. When people say “You rock!” it’s awesome, but when we know what we’re really wanting to do is happening we remember why we’re a band.

How do you think your live performances are different from your albums?
Josh: They have more bells and whistles. It’s a different level of the songs being performed, something unruly and unpredictable about it.

What does the near future hold for you guys as a band?
Josh: Slipping further into madness.  [ END ]