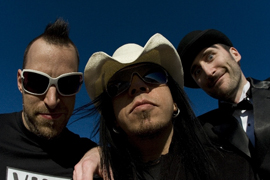 the Skinny: Since their formation in 1983, Jouregensen has been the only constant member of the popular underground industrial-dance band – along the way, issuing such classic releases as 1985’s Big Sexy Land, 1990’s Beers, Steers, and Queers, and 1993’s Linger Ficken’ Good, among others. After a hiatus of nearly a decade, the group – which is also known as RevCo – rose from the ashes in the early 21st century, issuing such albums as 2006’s star-studded Cocked & Loaded (which included appearances by members of ZZ Top, Cheap Trick, the Butthole Surfers, and Jello Biafra), and most recently 2008’s Sex-O Olypmic-O. But like all great franchises, there comes a time when the chairman must infuse it with new blood, and that’s what Jourgensen is doing with current releases, Sex-O Olypmic-O and it’s remix cousin Sex-O MiXXX-O. With Jourgensen having recently completed Ministry’s final world tour, the longtime bandleader has been focusing on producing (Prong, Ascension of The Watchers, a Ministry live album, Bradford and Clayton’s band, Stayte, False Icons (Ministry/Killing Joke keyboardist John Bechdel’s project), etc.) and running his record label, 13th Planet Records. “Well, I’ve run a label before – I did Wax Trax! in the ’80s, so it’s not like I’m jumping into this completely naive.  [ END ]