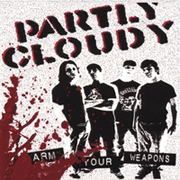 Partly Cloudy is a punk rock band with a couple releases under their belts. Though not well known, they have a decent enough following. Instantly, while listening to this obvious demo-quality release, I am thinking “wow, this band has a great deal of potential.” With a little fine tuning this 5 song disc could be a really easy sell.

Having heard many a demo in my day it’s hard to not attribute some of those qualities to this EP. This aside however, vocally the release reminds me of Story of the Year while sonically it can be compared to a finer A Static Lullaby.

Their website may not be appealing, nor is the lack of updates, but the band is currently on tour throughout the Us of A. Web aesthetics aside, the disc is a solid listen and a good effort. It may not be produced like a Britney Spears album, but the honest rawness, and live sound gives Partly Cloudy a bit of an edge. I think if these guys can come up with a slightly less cloudy-sounding full length, it would be a great mainstream listen.  [ END ]