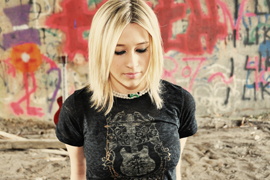 the Skinny: At just seventeen years old, Kaitlyn DiBenedetto has already mastered each of rock-n-roll’s staple instruments: power-driven electric guitar, driving bass and hard-hitting drums. Recording under the alias “Just Kait,” this extraordinary multi-instrumentalist is also an accomplished songwriter who crafts edgy pop songs that capture all the ups and downs of being a teenager. The youthful, perpetually rebellious energy of both teenage life and rock-n-roll culture electrifies each of Kait’s performances. She simultaneously delivers memorable vocal melodies and powerful rock riffs – a combination that makes comparisons to the original queen of rock, Joan Jett, inevitable – whilst still streaking enthusiastically through the same intersections that made Avril Lavigne’s modern pop-rock so vibrant. At the age of sixteen, Kait reached beyond her mounting New Jersey following and single-handedly caught the ear of MTV by winning a contest which had invited artists to create a new theme song for the popular reality show “Parental Control.” Kait performed every instrument on the winning track and was featured in the opening titles playing guitar and drums. Perhaps the only act she has left to master? Kait will soon hit the national music stage as MTV’s newest Discover & Download artist beginning July 20th, followed by a 4-track digital EP August 11th produced by 2N2 Productions. Her new single “Sick” will be featured on E! Networks and MTV all summer long.  [ END ]