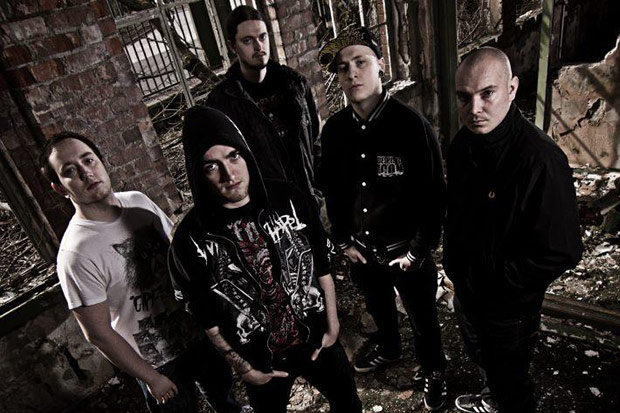 Ingested is an unbelievably heavy, brutal, in-your-face, death metal band from the UK. Citing influences such as Dying Fetus and Suffocation the band has put together a debut disc that seriously kicks ass. Bassist Brad Fuller spoke with me about the band, their songwriting process and life on the road.

Many of your songs are so hard and intense that I am sure they translate well into a live setting taking on a completely new life in front of a live audience. How does it make you feel when the emotion and power that you envisioned in the recording studio, come to life while playing in front of a crowd?
Brad: For us, playing live is definitely the best part of being in a band. When you see kids going nuts, banging their heads and shouting along with the lyrics – it just makes you feel amazing because they’re really enjoying something that you’ve created.

Different groups have unique ways of writing their songs. How do you guys go about writing your music? Is it a collective effort or is it more the efforts of one particular member of the band?
Brad: It’s mostly Sean that writes the riffs. Once the riffs are done, we send the rough recordings to Lyn and he writes the drums with a drum machine so we can all listen to it and get a feel for how it will sound when it is finished. Jay writes the lyrics and then we all get together at practice and tune and tweak until we get it to a point that we’re all happy with.

Every band has its musical influences. What are some of the other bands and artists that have greatly influenced you guys and your music?
Brad: I think there’s too many to list them all but obvious ones would be Suffocation, Dying Fetus and more modern bands like Despised Icon and Job For a Cowboy. Then there’s also stuff like Pantera, Slayer, Hatebreed, there’s countless bands that we love and are heavily influenced by.

The name of the band Ingested is interesting to say the least and sounds as if there is a story behind it. Where did the name come from and what is the story?
Brad: When we started we were originally called Age Of Suffering. Then we had a line-up change and we also changed our musical direction, taking our material heavier and more brutal. So we decided to change our name, scrap all the old songs and start from scratch. I can’t really remember how we came up with the name Ingested, but it means, “to eat” and we all like food so I guess that could be it.

How has MYSPACE and the internet impacted your band and do you think downloading helps or hinders the artists?
Brad: Myspace is an invaluable tool for young, upcoming bands because it gets their music out to people all over the world who would not have necessarily heard it otherwise. Also record labels check out bands that they’ve heard on Myspace and it gives all the information about upcoming tours, gigs, releases and merchandise.

Your lyrics are infused with heavy detail and raw emotion. What is it that normally gives you inspiration when writing lyrics and is there a theme or themes behind your music?
Brad: Jay writes 99% of all of our lyrics and he comes up with the song titles. He watches a lot of horror films and always has done so it is inevitable that the lyrical content and themes are what they are (which is generally rape, feces, and ultra-violence). His saying has always been “have you heard that riff? What do you want me to write about – teddy bears and picnics? Nah, this one can be about caving someone’s face in.

When you are on the road for a while I am sure you see and experience many different things you might not even have known existed. Are there any stories that stand out in your mind as being exceptionally strange or odd?
Brad: When we were on the Trigger the Bloodshed tour we went to Stonehenge. You see it on TV and in pictures and stuff but you do not actually realize how big it is until you see it right in front of you. The stones are like 30ft tall, it is a very different experience seeing them in real life. We played the Leeds Ghost Fest this year and while we were on stage, Alex from Despised Icon was at the side banging his head. When we supported Suffocation in Manchester, Derek Boyer asked to trade a shirt with us and then he wore it on stage and we got to meet them afterwards, which was very strange for us as Despised Icon and Suffocation are huge influences on us as a band. It was awesome to get praise from people we respect so much.

When you are out on the road anything can happen and often does. Can you think of any disastrous events that happened while out on tour? How did you solve the problem?
Brad: Every time we get in a vehicle something disastrous seems to happen. We were on our way back from a gig in Scotland and one of the pistons or something detached from the engine and punched a hole through the bottom of the car. When the mechanic got to us, he said that the piston could have gone out in any direction, and if it had gone to the left or right (cannot remember exactly), it would have hit something on the engine and blown us up. Then we have had numerous tire blowouts on the motorway – twice on our tour with Trigger the Bloodshed. We had to wait hours for a recovery vehicle to turn up.

What is the one thing you travel with that you just cannot live without?
Brad: CD’s I guess, if we didn’t have music to play in the van when we’re traveling for hours on end from one gig to the next I’m sure we’d all go insane. Also I know the question only says one thing, but we need our mobile phones as well so we can contact our family and girlfriends, and car mechanics quite often….

What is the toughest lesson you ever learned in the studio and on the stage?
Brad: Probably when you’re playing to a crowd that doesn’t really take to you at first, but you can’t let it get you down and still put 200% into your performance. As for the studio, you have just got to have patience because it takes a lot of time and it is not easy. You are constantly in each other’s faces and you can start arguing over stupid things. You just have to calm down and realize that you’re all in the same boat and then everything will run a lot more smoothly.

What is next for Ingested?
Brad: We’ve got a small UK tour in November with Fleshgod Apocalypse, we have a music video coming out shortly for our song Skinned and F****d. In January 2010, we will be embarking on the Bonecrusher Fest with The Black Dahlia Murder, 3 Inches of Blood, Necrophobic, The Faceless, Obscura, and Carnifex in Europe and the UK. Our second album is well on the way to completion, we just need to finish the lyrics and make some finishing touches. So if you are reading this and you have not already, make sure you check out our debut album – Surpassing the Boundaries of Human Suffering and get yourself down to one of our shows, bang your head and pit like beast! Cheers!