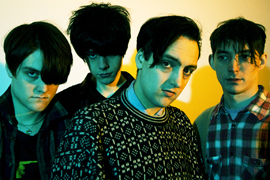 the Skinny: They don’t make them like this anymore… the well-scrubbed Londoneering indiepoptastic quartet Hatcham Social consist of Toby Kidd (vocals/guitar), Finn Kidd (drums), Dave Fineberg (bass/vocals) and multi-tasking new boy Jerome Watson (synth/guitar). You Dig the Tunnel, I’ll Hide the Soil is Hatcham Social’s debut album. Recorded at big mushroom studios in the north of England with the Charlatans singer Tim Burgess and Jim Spencer at the controls this is a spiky, sparky collection of itching pop tunes which hark back to a time of musical innocence. You couldn’t accuse the Hatcham boys of rushing things either: in the past two years they have released four limited edition independent singles, compiled two mini-album cassette, played over 200 gigs and enraptured countless music lovers with the sort of charmingly jagged old school alternative stance several of us thought had been destroyed forever by the corporate indie boomtime of the early noughties. In 2008 alone they toured the UK with the Charlatans and then with Ipso Facto. They released their Crystal World mini-album in Japan and signed to TBD Records in North America, becoming Radiohead’s labelmates. Toby puts it so succintly: “I am not against selling records, but I am against selling shit records.”  [ END ]