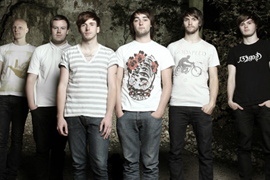 the Skinny: Flood of Red are set to release their debut album Leaving Everything Behind on their own label Dark City on October 19th. Produced by Brian McTernan (Cave In, Thrice, Converge), Leaving Everything Behind sees the band making a large leap into new territories. Toned-down and refined, Flood of Red now paint from a broader musical palette, incorporating the ambient and soundscape elements that earlier recordings hinted at, but without ever compromising the heavy blow they’ve been praised for. Inspired by the emerging practices of the likes of Radiohead and Nice Inch Nails, Flood of Red decided to release their debut album via a variety of neat, independently-funded marketing techniques. The marketing of the album is forward-thinking, by-passing the standard practices of old, cut out the middle men and sell straight to fans who can choose from a variety of album bundles – from basic digital downloads through to value-for-money packages featuring CDs, merchandise, exclusive tracks and more. In addition, the album will be available for download for only $1 until it’s release on October 19th.  [ END ]