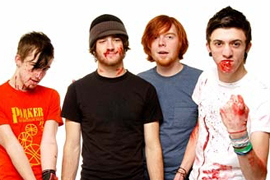 With: Baptized in Blood, Trophy Scars, Dancing With Paris and Texas, Armed To the Teeth. If I could think of one phrase to sum up the entire night of September 15, 2009 it would probably be “the best show I’ve probably ever been to.” This seemed to be the consensus among all the show-goers and especially with my friends who were there with me.

First band up was Toronto (well, Etobicoke) natives Texas, Armed to the Teeth. The first time I heard these guys was at Rancho Relaxo on College Street in Toronto; we can consider this the beginning of me being a fan. They had a new vocalist this time, the “new” vocalist was actually their old one, but he came back to the band. I’m not sure on the story there but he fits the band a lot better then Andre, who has another band called Blackout Effect. If you’re in Toronto check these guys out, especially if you like NuMetal from the early-mid 90s, that’s the closest reference to their music I can think of at this time.

Next was another local act, self-proclaimed Groovecore band, Dancing with Paris. I loved their set, the 7-string guitar made their sound really fat. It was awesome; they went from heavy-as-shit riffs throughout their songs to super catchy, poppy choruses. They have a slow, instrumental song by the name of “(Boardwalk)”, the vocalist originally asked everyone to slow dance but then jumped down off the stage and found my buddy, Matt Almeida of The Good Times and began to dance and hold him ever so gently. The vocalist then turned to me and put his arm around both Matt and I and we began to sway to the music, eventually this turned into a large circle awkwardly swinging back and forth. Of course this could only last so long, the vocalist jumped back on stage to help the band pummel us with their heavy-ass beatdowns. Definitely another one to check out, especially if you like your music super heavy and super catchy. A digital copy of their EP is available on their MySpace for free!

After Dancing with Paris had finished doing their thing, it was time for Morristown, New Jersey’s Trophy Scars. They have a sound that seems to resemble a combination of Tom Waits and The Mars Volta with dash of The Beatles and bit of Led Zeppelin. Catchy and experimental these guys rocked the house and had everyone singing with them. After the show I had a chance to chat with bassist, Andy Farrell. He told me how much they loved playing in Canada and how they hadn’t been here in 2 years. He told me they’d be trying to come up at least once or twice a year so next time they’re in your area check out their set! You will leave wanting more, I swear.

I remember seeing the next band 2 years ago at the Funhaus when it was still open, they were playing with The Holly Springs Disaster so of course the show was packed. However, I remember a totally different band. Even vocalist Johl Fendley admits that they’ve changed with the help of Roadrunner Records Canada. That change, was for the better, if Trophy Scars rocked the house, Baptized In Blood brought it down. They bring their mix of punk and metal to the table and throw in licks similar to that of 80s hair-metal. You could call them somewhere caught between Protest the Hero and Blessed By A Broken Heart but not even that is suiting or nearly able to describe the power or energy of their live show. I checked out the album, Gutter Bound, as well two words: Fucking sweet! I will definitely be singing along with everyone else at their next show. Heavy-music-lovers unite and help this London, Ontario based band take over the world!

Last but certainly not least was Fear Before (formerly Fear Before the March of Flames, for those who may not have known about the name change). So much happened during their set that I know I’ll probably miss something. First the band came on stage all decked out, the drummer was wearing an Egyptian head dress (the type you would see on a sarcophagus); the guitarist had what appeared to be a police officer’s that and a frilly pink scarf; the singer was wearing a zebra print collared shirt with flowers on it and a furry hat in the shape of a zebra’s head. Even their lights and the stage were covered in tree branches. He jumped off the stage during the second song and prancing around the Kathedral. The costumes eventually made their way off of the guys while they played both new and old stuff. I was glad to hear some of my favourite songs off the albums pre-name change, especially those off of The Always Open Mouth. Nearly everyone was singing along. Throughout the set they kept mentioning that it was a party, soon I would find out that they were foreshadowing the end of their set. After they finished their amazing live show, which displayed their awesome stage presence and wicked lighting, “Bale Out”, by RevoLucian, * came over the speakers. The singer immediately proclaimed that I was a dance party and the whole band and crew grabbed the trees and began dancing all around the club.

After the show we all stepped outside and had a short toke-n-talk with Fear Before and the other bands as well. I would soon find out the story behind Goose’s nickname and that everyone else agreed that this was definitely the best show they had seen in a long time, if not ever. All the bands were spot on and awesome, the music flowed nicely and had enough variety to keep you from getting bored. It was quite the industry night as well. Roadrunner Records, Metal Blade, UR Artist Network, Underground Operations, NOW! Magazine, Def Jam Records and members of local bands were there as well. That being said the turnout wasn’t what I expected, I was really hoping more people would show up, but everyone who wasn’t there missed out huge! I advise you to check out every band who played this show, the show which, again, I have put at the top of my non-existent “Best Shows I’ve Ever Seen” list.

* The final song, “Bale Out” for those of you don’t know is a remix of the infamous “Christian Bale freak-out” on the set of Terminator: Salvation. Check it out on YouTube.   [ END ]

Check out the song: “Get Your Life Together”