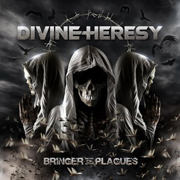 Warning! There is a plague spreading worldwide and it is quickly infecting all of our ears. This plague happens to be the band Divine Heresy; more specifically their new album Bringer of Plagues. After two years the band has reemerged with a HEAVY new sound and an arsenal of tunes.

After difficulties with previous vocalists, the band sought a new lead voice. This position was filled by none other than Travis Neal, formerly of the group The Bereaved. He instantly transformed Divine Heresy’s sound. Travis brings to the fold intense vocals which certainly give the band a more aggressive feel. Tim Yeung’s drums are consistent with his previous work; tough, complex and high concentrations of double bass. Dino’s guitar tracks are equally complex. Like the previous record he once again has shown us the complexity of his playing and his speed. Finally and not to be outdone, Joe Payne matches all speed and intensity with his bass guitar.

The sweet appeal that draws many people to this band is not necessarily their style of music, but rather the musicians themselves. Having members from bands such as Fear Factory, Nile, Hate Eternal and Vital Remains (and other highly notable metal acts) has only helped to expedite the band’s success. This new release brings out the best elements of each members’ other projects ultimately meshing into a new sonic boom of awesome.

Bringer of Plagues is definitely a step up from Divine Heresy’s thanks in large to the intense instrumentals and new vocals. Hopefully, Travis Neil will be a permanent addition thus creating a solid lineup and future for the band. Divine Heresy is for fans of The Agonist, God Forbid, The Autumn Offering and Diecast.  [ END ]