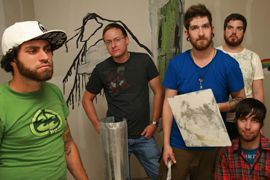 The newest release from Canadian rockers Dancing With Paris, There’s Something In The Water is filled with blistering guitar riffs and a ferocious vocal assault guaranteed to get listeners out of their seats and banging their heads. Now that it has been released the band is not resting on their laurels, they plan on playing select shows in and around Ontario and then taking their music to the rest of the world. Drummer Terrence Harris and guitarist Andrew Wilson took sometime out of their busy schedule to answer a few questions about the writing process for There’s Something In The Water and what is up next for the band.

Different groups have unique ways of writing their songs. How do you guys go about writing your music? Is it a collective effort or is it more the efforts of one particular member of the band?
Wilson: Usually when we write songs, we are all in the room just trying out riffs and new ideas. Terrence and I are the ones that will come up with all of the heavy stuff then Brad will come up with the melodic parts. But to make a long story short it is always a group effort.

Terrence: Yeah, generally Wilson or myself will come up with the heavy or main bits of the song, and then Brad will add the melodic parts. It often takes place over a bit of time, and each member throws in their two cents on the song until it finally takes shape and is ready to be played live.

Every band has its musical influences. What are some of the other bands and artists that have greatly influenced you guys and your music?
Wilson: We all have different tastes in music and if we had to pick bands that greatly influenced our music they would be: Deftones, Thrice, After the Burial, Alexisonfire, Architects, Straight Reads the Line, Dredg… there are so many to name.

Terrence: Deftones are definitely a big influence, but then everyone has their own tastes in music which is what they then bring to the table. Now with people hearing the new EP we are getting people coming up and asking do you guys listen to Dredg, Straight Reads The Line, Alexisonfire… we’ve been compared to a wide variety of bands, so name an act and chances are it’s influenced us.

The name of the band Dancing With Paris is interesting to say the least and sounds as if there is a story behind it. Where did the name come from and what is the story?
Wilson: We were going to name our band Paris, but thought that it was a little to plain so, Terrence told us that he had gone to a strip club a long time ago and met a stripper named Paris that was one of the hottest and nicest girls he had ever met. He never got a chance to talk to her really for the rest of the night and he pretty much fell in love with her and never saw her again. So we decided to call the band Dancing With Paris.

Terrence: Okay, this is the actual version of the story. I had gone to my first strip club with our vocalist, James, and I had partaken in a few alcoholic beverages when this stripper by the name of Paris comes out. She was definitely beautiful, but I never got a chance to talk to her, as she had been pretty much bought for an entire night of lap dances by some guy. Also, if that was not happening, she was fighting with her boyfriend. That was the last time I saw her. Then when the time to name the band came, James suggested Paris, but we saw that there are many bands named Paris out there, so they called it Dancing With Paris. I just tell people we’re a concept band about wanting to get that one dance with Paris.

The songs on your new EP There’s Something In The Water are not exactly what you would find on your typical hard music album. You offer a welcome range of musical sounds and abilities. Do you think this is due in part to your varied influences and/or a desire to explore new realms of music?
Wilson: It is a mix of all of the music that we like and all of the artists that have influenced us and also coming up with the new ways to deliver many types of music in one song or in one EP that would flow and catch the listeners’ attention. We don’t sit and study the ways to write song, it just comes out that way and it is pretty cool that we don’t have to be super analytical about these things.

Terrence: It’s mostly influences and our desire to be different. It is definitely exciting to play music and know that we have that factor that makes us different from our colleagues in the scene. The end product on the EP was also a result of our pre-production sessions with Producer/Engineer Shawn Lefebvre. Shawn steered us away from our tendency to just be heavy for the sake of being heavy, and got us to see the bigger picture of the songs. A lot more structure was introduced and pop sensibilities were included in the music.

What is the toughest lesson you ever learned in the studio and on the stage?
Wilson: In studio, definitely being able to hear everything from a perspective of not playing and hearing it, really makes a difference in the way you had perceived yourself sounding before hand. The biggest lesson there for everyone was that there is always something to improve on even when you think that things are the best that they could be. The biggest lesson that I think we have learned on stage is that if you are not tight, don’t even bother playing a show because if you cant give your all on stage without worrying about what your are playing then you are not going to be entertaining to your full potential.

Terrence: When we put together our first demo, we learned that the energy of the live show doesn’t necessarily translate onto the recording. It sounded good for what it was, but it did not really capture the vibe of the band. The studio is also a major blow to your ego, because basically everything you’ve written and worked on gets turned on its head when pre-production happens.

Are there any tracks that are your personal favorites or that have some good stories behind them?
Wilson: All of our tracks are pretty new and because of that they have been masked. It is now really hard to decipher which ones are my fav. They are all my fav right now! The cool story behind them is that a lot of them were created using old riffs that we had written around when we had been playing with each other for about a year.

Terrence: “Orange County” is probably my favorite to play, but considering how far “Bled Dry” has come along since we first wrote it, like a year and a half ago, that would be the stand out track for me. It used to be over five minutes long and most of us hated playing it but by the time we restructured it into what it is now it is one of my favorite ones to play live. Most of the songs are recycled bits from old songs we no longer play. We will take a breakdown from one song or a chorus from another song and play around with them until something clicks. We have so many songs that have been written but never actually played live, so we have a lot of material still to work with.

What has been the most memorable moment of your career so far?
Wilson: I would have to say making the EP. It was an experience that we all had to together and not only do we know more about the whole recording process, we have become a lot closer as a family. Aside from all that, it was so much fun to make.

Terrence: That past few months, culminating with the EP release have been great. Signing with Throw It @ The Wall Management has been what I think is our best move as a band, as we have really gotten a lot accomplished with their guidance, such as bigger shows and more connections. The EP is something we’re all really proud of and already it is getting a pretty good reception from what we’ve seen!

Terrence: Take the EP and add about 10 gallons of sweat. It’s really high energy, occasionally to the point where someone falls onstage.

Any tour plans in the works at all?
Wilson: For the next 3 or 4 months, we are just going to be concentrating on doing weekend stints in certain regions of Ontario just to build a fan base here. Since this scene seems to be so popular in Europe, we are going to try and get some distribution there as well as, hopefully (keep you fingers crossed), a tour there as well!

Terrence: Like Wilson said, right now we’ve been focused on establishing ourselves in Ontario, and playing weekend shows in its various cities and towns. So if you want to see us in your town drops us a line and we’ll hook something up!

What is next for Dancing With Paris?
Wilson: Definitely the whole touring aspect. Now that the EP is complete and we have a sweet-ass van, (The Magic Tour Bus or the Aluminum Falcon we still haven’t decided) the only thing left is to hit the road!

Terrence: World Domination! We have the EP, finally got a van, so there’s really no excuse for us not to set our sights on the rest of the world.  [ END ]