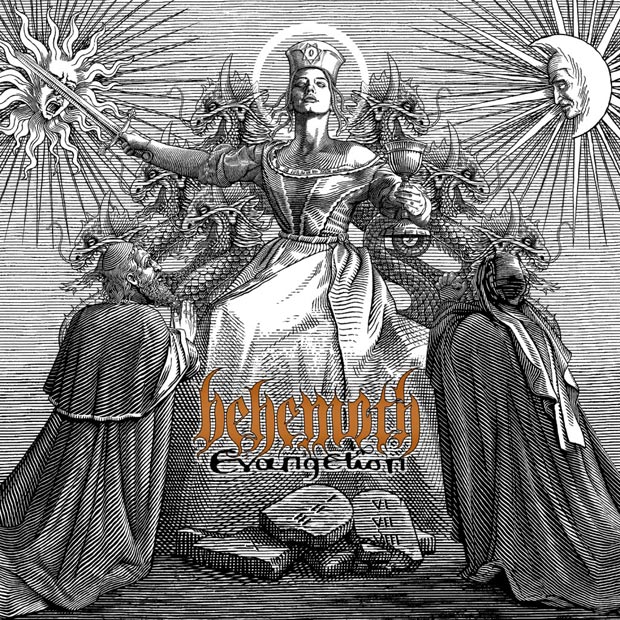 Evangelion is the newest release from Black Metal giants Behemoth. This is the bands ninth full-length release and it is beyond a doubt the band at the top of their game. While all of the standard and necessary elements of a good Black Metal record are present and accounted for, it is the bands trademark sound that distinguishes and separates them from others in the genre. All elements fans have come to expect from the band are here, but everything has been kicked up a notch. With tons of double bass drumming and guitar riffs accentuated by the growls of Nergal, this is a damn good groove driven CD.

If you now anything about the band, you know that they have never been known to shy away from controversial topics and Evangelion is no different. Lyrically, this record tackles what the bands bio describes as, “the reclamation of the self—a self unbound by the manmade strictures of tradition, politics and religion.”

Musically, while the band pounds hard and heavy as usual, most of the songs on Evangelion are not insanely fast. As a matter of fact many tunes are a bit slower and more groove oriented. A good example of this can be seen in what is also my favorite tune in the disc, “Ov Fire And The Void.” This is a slow song as far as Black Metal is concerned but it is one that I think showcases the tremendous songwriting and playing Behemoth is capable of.

After listening to Evangelion it is clear to me why after sixteen years in the business Behemoth are still releasing relevant Black Metal records; they constantly write solid, heavy, in-your-face death metal. This record is about as good a release in this genre as one can get and at the end of the day, I would have to say that it is absolutely worth checking out.  [ END ]