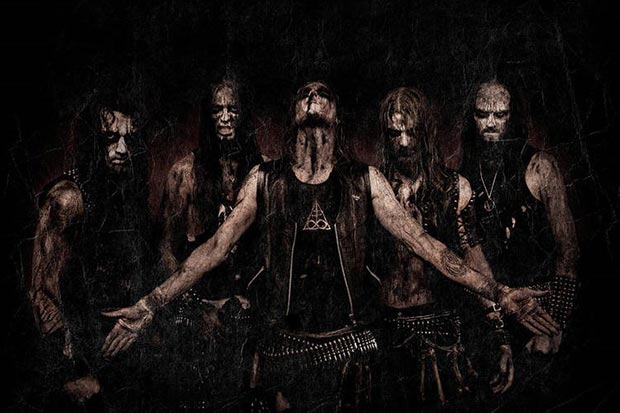 On July 21st, the Swedish Metal band Valkyrja re-released their full-length CD The Invocation Of Demise on Metal Blade Records. The band has signed a multi-album deal with Metal Blade Records and is looking to take their brand of Metal to a larger audience. I recently spoke with vocalist A.L. about The Invocation Of Demise and what we can expect from the band in the near future.

Many of your songs are so hard and intense that I am sure they translate well into a live setting taking on a whole new life in front of a live audience. How does it make you feel when the emotion and power that you envisioned in the recording studio, come to life while playing in front of a crowd?
A.L.: A live appearance is a situation that must be organized the right way in order to capture a treat for all senses. Out of the morbid atmosphere surrounding the stage comes a situation where the aggressive and overwhelming energy fills the body by mere existence. Something none of us can deny.

Different groups have unique ways of writing their songs. How do you guys go about writing your music? Is it a collective effort or is it more the efforts of one particular member of the band?
A.L.: One particular member, most of the times. When I write a song I do not just have some riffs, it is about the song as a whole, which leads to ideas of every instrument. If everybody writes, their instrument there would be a risk to destroy the main idea. But of course, it happen that someone’s complements.

The name of the band Valkyrja is interesting to say the least and sounds as if there is a story behind it. Where did the name come from and what is the story?
A.L.: At this state of the band, it doesn’t really matter. The word itself has its origin in Norse mythology, which we aren’t influenced of, or into at all.

Your brand new CD titled The Invocation of Demise was released on July 21st. Now that it is complete, how do you feel about it? Are you satisfied with the outcome?
A.L.: It was originally released in 2007 by Northern Silence Productions (CD/LP) and now re-released via Metal Blade Records. The content is the same – we felt it was no need in any additional editing – but with a new layout. The reason for the re-release is to make it available in places the NSP distributors could not reach.

Give us some insight into the record The Invocation of Demise and the meaning behind its title?
A.L.: After two demos the first album felt like a rebirth of sort – an invite to higher grounds. The work of today has more or less only had that album as base, not the demo material that came earlier. The lyrics handle most of the times with the force and manifestations of the destructive and Death itself. Not always simply the death of a man, but the symbolic, fearful and dark that work in its name.

Your lyrics are infused with heavy detail and raw emotion. What is it that normally gives you inspiration when writing lyrics and is there a theme or themes behind the writing of this record?
A.L.: The “Invocation…” – album was written in many various ways since it took over two years to compile its entity. When we had all we felt was needed to label the work as “complete” it was there in front of us. Nothing is written simply o be written. It all must work as a key in a bigger scheme.

What is the hardest part about being in a touring metal band and what is the biggest obstacle your band faces?
A.L.: We are not at this moment a touring band, so I have no insight in those obstacles. But in general I cannot think of struggles, since we always – in one way or another – find a way to eliminate the obstacles that appear before us. Delays may be the outcome of this at times, but never anything that would be more harmful to our camp.

All of that passion that you play with must be tough on you physically. How do you prepare for the physical demands of a tour?
A.L.: Referring to the last question we haven’t experienced the tour demands. I don’t think that the physics would be a problem, rather the psyche. We’ll see who’s strong enough.

What is next for Valkyrja?
A.L.: As we speak, the second album is being manifested in Necromorbus Studio. Await the coming.