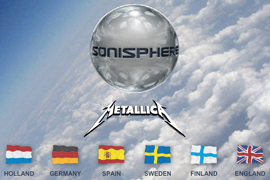 The beginning of August saw the UK experience the grand finale to the first ever Sonisphere Festival – a series of one day rock events in Holland, Germany, Spain, Sweden and Finland, which featured some of the best bands on the planet. The final Sonisphere installment took place over two days (plus 1 extra day for weekend campers) on the grounds of stately home Knebworth House. Over the two days, more than 60 acts took to the stage, including Coheed and Cambria, Taking Back Sunday, The Used, Limp Bizkit, Lamb of God, Avenged Sevenfold, and Mastodon, with Linkin Park and Metallica headlining Saturday and Sunday respectively.

It might seem a little unusual to hold an event like this at a stately home, but Knebworth House is no stranger to big bands and loud music. In 1974 it hosted the Allman Brothers’ Band in their first show outside of the US, and attracted a crowd of 60,000. Following this success, acts including Pink Floyd, The Rolling Stones, Led Zeppelin, and Queen have all played at Knebworth, and in 1996, britpop giants Oasis headlined a show selling 330,000 tickets in just nine hours. But enough of the history lesson, let’s talk rock… here’s some of the highlights of the festival.

Alien Ant Farm: California 4 piece Alien Ant Farm opened the main stage on Saturday. Considering most of the festival campers had been up until the ungodly hours of the morning undoubtedly consuming beyond-excessive amounts of alcohol, Alien Ant Farm had an excellent reception. Granted, most of the people mainly seemed to be there to hear the only songs they knew – notably the 2001 hit “Smooth Criminal” and follow up “Movies”, but even the lesser known songs were well received. Though the band have been out of the limelight for some time, they put on a good show. Dryden Mitchell’s tuning was great and though there were a few minor issues with sound – which is not surprising for the first band on the main stage and with due credit to Sonisphere sound technicians, the problems were resolved quickly enough – overall it was a good set, generating enough energy to help start cure the hangovers. A great start to the festival.

Coheed & Cambria: Coheed and Cambria were originally set to play the main stage but due to travel to the site being delayed by a missed ferry (…what?), their set was postponed and they were, in a bold move by festival organisers, replaced by virtually known Japanese band Fact. Fact did, naturally, get a fair few bottles thrown at them though in their defence they took it in their stride, putting on a good show and winning over most of the crowd. Later in the evening, Coheed and Cambria took to the stage in the Bohemia tent, which ended up being a rare opportunity for fans to see them in a much more intimate setting than usually possible – a fact emphasised by the many people literally overflowing from the tent, and many more sneaking in under the sides of the tent while the security guards weren’t looking. As expected from Coheed and Cambria, they played brilliantly.

Avenged Sevenfold: Headlining the Saturn stage on Sunday was Avenged Sevenfold. Playing in between Nine Inch Nails and Metallica is a feat that would make even the biggest bands quiver with nerves, but was a challenge Avenged Sevenfold relished. And in all honesty, they totally nailed it. From the second they walked onto the stage, everyone knew something great was about to happen. After a cancelled UK tour and pulling out of the Reading and Leeds festivals last year, a lot of fans were left disappointed. Avenged Sevenfold saw to it that no such disappointment would occur this time though, as from start to finish they plowed through their set with more gusto than Lindsay Lohan through a bag of coke. Lead vocalist M Shadows moved about the stage with a confident swagger, while guitarists Zacky Vengeance and Synyster Gates rocked out, guitar solos soaring over the increasingly-enthusiastic crowd. A brief hiccup in the set was caused by a broken kick drum but drummer The Rev was back in business in no time thanks to a speedy drum technician. A solid performance from bass player Johnny Christ completed the lineup, and the band chemistry was clear as they all looked to be having almost as much fun as the crowd. The great thing about Avenged Sevenfold is that they have the whole package; they look like rock stars and they act like rock stars, but most importantly they don’t cross the line between confidence and arrogance. Every song was played perfectly and their whole performance firmly cemented them as one of the best bands around at the moment. Absolutely one of the highlights of the festival. The only possible complaint about their set is that it just wasn’t long enough.

Limp Bizkit: In a move that caused Machine Head to drop out of the festival (before being reinstated as “guests” in the same position they were originally scheduled to play), Limp Bizkit were booked as the Saturday night penultimate headliner on the main stage. Despite a great performance musically, most notably from the eternally-awesome Wes Borland, it’s difficult to push past just how much of a dick Fred Durst really is. Whether it’s real or a stage persona is difficult to tell, but either way, their live show should come with a major Dickage Disclaimer. Everyone in the crowd seemed to enjoy the set, especially doing the moves along to “Rollin”, and joining in with other typical gangsta-esque motions and general buffoonery throughout the rest of the songs. But there’s just no getting past Durst being a dick. He continued his onslaught of cursing from the moment he walked onstage until the moment he left, constantly saying things like “I just don’t give a fuck” which mostly just baffled the crowd and left them thinking “wait… what?”. So Fred, if you’re reading this – cool it on the “I’m more fucking hardcore than you and you know it” attitude. Cos you’re not. You’s just a dick, man.

Set List:
My Generation
Livin’ It Up
Show Me What You Got
Hot Dog
Eat You Alive
Rollin’ (Air Raid Vehicle)
Break Stuff
My Way
Nookie
Faith (George Michael cover)
Take A Look Around

Nine Inch Nails: In what is expected to be their last ever UK show, Nine Inch Nails performed before Metallica on the main stage on Sunday. Opening with the awesome “The Way Is Out”, the set took an unusual turn when some of the more downbeat songs were played. Definitely a daring choice for a performance at a festival being played by mostly heavy rock acts (Bjorn Again notwithstanding) and the quieter songs did seem to confuse a lot of people, but for Nine Inch Nails fans or those members of the crowd willing to think outside the musical box for a while, it was an absolute treat. The sheer genius musicianship of Nine Inch Nails means Trent Reznor doesn’t need to resort to swearing at the crowd (I’m looking at you, Durst) or rock and roll antics to keep things interesting. Reznor managed to convey a sense of intimacy despite playing to a crowd of 40,000+, and the closing song “Hurt”, was both painful, and yet somehow beautiful.

Set List:
The Way Out Is Through
Wish
I Do Not Want This
Something I Can Never Have
Gone, Still
The Frail
The Wretched
Non-Entity
Lights In The Sky
The Downward Spiral
Hurt

Hundred Reasons: Although Metallica were the Sunday night headliners, the festival was actually closed by British band Hundred Reasons as they played in the Bohemia tent. Due to Metallica running slightly over the allotted time slot, the opening of Hundred Reasons’ set wasn’t met with the biggest of crowds, as just about everyone was back at the main stage. Nevertheless, they opened with the excellent “I’ll Find You”, and set the tone for an overall fantastic set. About halfway through the setlist, the huge tent suddenly filled up with people, to which vocalist Colin Duran said, amused, “I guess Metallica are finished then”. They had finished. And everyone wanted to join in the fun one last time before leaving the festival and returning to real life on Monday. Closing with hit singles “Silver” and “If I Could”, Hundred Reasons proved during this performance that they deserve to be a lot bigger than they are. A great live performance from a truly underrated band

Set List:
I’ll Find You
I’ll Never Know
Dissolve
Feed The Fire
The Perfect Gift
Kill Your Own
Live Fast, Die Ugly
What You Get
Falter
No Way Back
Silver
If I Could  [ END ]