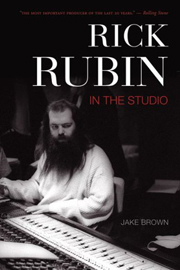 If you are a fan of music of any genre then chances are you have probably listened to a CD produced by the legendary Rick Rubin. In The Studio chronicles his rise to being one of the most sought after producers in the music business today. The book begins in the mid-eighties with his partner Russell Simmons; the two co-founded Def Jam Records. Def Jam was cutting edge at the time and highly influential in breaking the careers of music superstars such as LL Cool J, The Beastie Boys and Run DMC.

Rubin’s career exploded in the Eighties; he eventually split with Simmons and created his own label, Def American. As president of his own label he then went on to work with a plethora of diverse big name artists producing records for Slayer, Johnny Cash, Neil Diamond, Mick Jagger, Metallica and Glen Danzig to name but a few. Many of the records that Rubin has had a hand in producing have gone platinum and garnered critical acclaim for the artists.

While I imagine it would be impossible to chronicle Rubin’s entire career, In The Studio covers the highlights. I found the in depth interviews and narratives with some of my favorite bands extremely interesting and very informative. For me, this book works on two different levels. As an engineer in the music business for the past twenty years, I found the production notes and stories from in the studio quite interesting. As a fan of most of the bands in the book and all of Rubin’s work, I found this to be an extremely enjoyable and entertaining read.

Not only is it an insider’s view into the world of one of the most influential producers of our lifetime but it also chronicles the recording process for some of the best albums recorded in the last 25 years; LL Cool J’s Radio, Slayer’s Reign In Blood and The Red Hot Chili Pepper’s Blood Sugar Sex Magik amongst others.

Honestly, I found myself thoroughly engrossed in this book, so much so that I finished it in two sessions. I recommend Rick Rubin: In The Studio to anyone who is a fan of music; it is a terrific in-depth look behind the scenes into the recording of some of the best albums of all time.  [ END ]