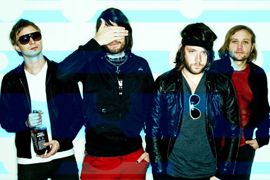 Interview with Oh No Not Stereo guitarist & vocalist Skyler Nielsen

Oh No Not Stereo is the spawn of Skyler Nielsen and Mykul Lee, two multifaceted musicians who really do it all for themselves. Formed in 2003 and based out of Los Angeles, these boys are busy making and performing rock and roll that does more than just impress, dare I say, it excites. Their music is edgy and gritty, but as catchy as you can get. Here, Nielsen talks about being an independent band, becoming a foursome, and the countless things that you can expect out of ONNS.

Obviously you guys are both multi-instrumentalists, but what’s the story behind the first instruments each of you picked up?
Skyler: We both started playing piano at a very young age, which ultimately led to us pursuing drums, guitar, and bass, amongst many other instruments. Piano definitely gave both of us a greater fundamental understanding of rhythm, which Mykul and I meet eye-to-eye with when we write and play live. When we met in 2003, our roles were reversed. I was playing drums in a band and Myk was playing guitar in a band. We were both picking up on each others’ dexterity pretty quick, which quickly led to the conceptual formulation of our band.

Well, since that there’s been big tours, three records, a solid fan base and more. What is it that’s kept you guys going as an independent band this whole time?
Skyler: We have been working really hard on creating and maintaining our independent legacy, and it’s only just beginning. We have already had such a great response from friends and fans and it’s still totally an underground, DIY level. This band is our enterprise and it’s always just been Myk and I behind the reins. We constantly strive to challenge ourselves with new opportunities and musical ventures and we’re always ‘planting seeds’ and thinking two steps ahead when keeping ourselves busy and we’re continuously updating our business plan… rolling with the punches. Coors Light and Whiskey helps us keep going too, I’m not gonna lie.

What do you think is the hardest part about being in an independent band?
Skyler: Having enough money to operate on a large scale consistently. Radio play, tours of all lengths, publicity and marketing etcetera, etcetera… all cost lots of money. Representing yourself as an independent band can be tough sometimes too, ’cause no matter how accomplished an independent band is, a lot of people in the music industry wouldn’t consider them as being ‘credible’ if they aren’t on a label. It’s all business, which we understand, and we learn something new every day regarding how to represent ourselves as a legit company.

I know that you and Mykul are at the heart of Oh No Not Stereo, but the band is touring as a four-piece right now. What’s it like bringing people into your “duo” dynamically?
Skyler: Myk and I play all the instruments on the record, but it’s crucial to have those parts played live to add sonic value similar to our studio sound. We couldn’t ask for a better touring team right now. These guys are professionals and we’re all looking forward to relentlessly touring in promotion of our new record 003 which came out on March 10th.

How did you meet Jussi and Marc and how was it decided that these were the right guys for the band?
Skyler: We’ve known Marc for years, he is a great guitar player that has been in several bands in LA. When we asked him to play bass for us, he already knew all the songs and vocal harmonies so it was undeniable that we had to steal him from his other band. We met Jussi through our engineer Max Coane and instantly hit it off. He’s a really good guitar player and we’re stoked that he’s stoked to be in ONNS. Jussi is from Finland so he introduces us to some really cool Finnish people everywhere we go.

Was there hazing or any sort of rigorous screening process involved?
Skyler: Hazing? I’m not positive what you mean by that, but yes. Absolutely hazing involved. The first few months of both of the guys being in the band they definitely took the short end of the stick… getting shit for being the ‘new guy’ or the ‘rookie’. It was all in good humour and now the guys like to give shit to our tour manager or merch girl, passing along what they were handed at the beginning.

Does it seem like the four-piece will be the face of the band for another while?
Skyler: Absolutely. We’re proud to say these guys are onboard and we’ve found a solid touring team that shouldn’t be changing any time soon.

Do you ever play live as a duo?
Skyler: Not anymore. Even when we do acoustic performances, all four of us are there. Myk and I have talked about covering the entire Weezer Blue Album at a show, but we’d be stupid not to do it as a four-piece!

You guys are playing quite a few sets at NXNE this weekend. Are there any that you’re particularly looking forward to?
Skyler: We’re looking forward to returning to Toronto in general! We played there for the NXNE Festival back in 2006, and had a great response. They’ve asked us to play their closing ceremonies again this year so that should be fun!

Since you’ll be in town for the entire weekend, are there any acts that you’re planning on catching?
Skyler: We’re gonna be bumming it through the entire city for 5 days. I’m looking forward to running into bands that I have never heard of and meeting all sorts of new people and musicians. We can never make a schedule at festivals like this, we always just have to take things as they come.

So the names of your albums. “001”. “002”. “003”. That’s a counter with 999 possibilities! What can everyone be expecting from ONNS in the future?
Skyler: The idea behind having numeric titles for our records is exactly that! Hundreds of things to come. We aren’t stopping until we die.  [ END ]