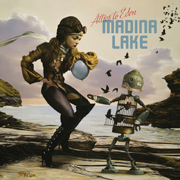 Winning Fear Factor, releasing their first album and touring across the globe, these Chicago boys have been busy making a name for themselves worldwide. In the midst of all this, Madina Lake have also found the time to record their second full length, Attics To Eden. This album features the second installment of Adalia’s story of finding Utopia.

Since their last record, Madina Lake have applied what they’ve learned from touring, transforming them from a poppy-sound to that of a mature rock sound. Influences including bands such as My Chemical Romance, Taking Back Sunday and Anberlin can be heard on this record all nicely blending with their own style. The first track, “Never take Us Alive”, makes for a good transition from their last record as it is the only true poppy song therein. This tune is also featured as the first single off the album. Fans should not fret however, as even though they have experimented and changed their sound, they are still the same Madina Lake they’ve come to love. Full of catchy songs such as “Welcome To Oblivion” and “Criminals”, these guys keep on maturing as a band while sticking to their roots.

Along with changing their sound, Madina Lake have also changed the artwork style for this album. The disc offers a map of a fictional town which folds out from the booklet. The booklet also explains a small portion of Adalia’s travels en route to finding Utopia. These are useful for understanding Adalia’s quest and will no doubt be a link for the third installment/album when it comes out.

This release is a big step for Madina Lake in every aspect. From the music to the layout of the art, the band has really stepped things up. For anyone who is interested in their fictional story or are fans of their last record, they should get a copy of this album for sure.