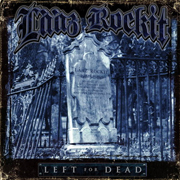 Laaz Rockit brings to the table a crushing style of metal that recalls the classics of metal. We are reminded of bands like Testament and many others through the styles the band portrays so effectively. Laaz’s sound is crisp enough and manages to display thrash genre pretty effectively. The band lays down riffs with enough intensity, though a bit more veracity might have helped them elevate their style to an even greater level by a slight bit. This presents the biggest issue Laaz Rockit have to overcome as they try to separate themselves from the thrash pack.

Issues aside, I am always willing to accept a solid thrash metal platter as I’m always anxious to hear anything this particular genre has to offer. Though the band doesn’t bring forth the most memorable moments possible, they are a pretty enjoyable listen. There are also some more mellow portions that help even everything out such as what can be heard on “Desolate Oasis”; which has its quieter segments, but turns into a monstrous beast of a song eventually. The tone of the album is quite serious and appropriately complements the nature of the songs as they trudge along.

The songs are played with a classic thrash mindset, but never quite live up to the best of the genre slightly marring the overall effect of their output. The live songs tagged on at the end of the performance don’t particularly add anything spectacular to what’s to be found here, but are a bonus either way. Overall, you just have dig the respectable display of thrash to be found here… which hopefully will get your fists pumping to a certain extent. This is a good album, but certainly nothing amazing within the thrash genre. As such it comes recommended to big fans of thrash the most.  [ END ]