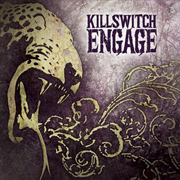 The melodic metalcore kings are back with their fifth studio album, Killswitch Engage. Now I know this seems odd, considering the band’s first album was also self-titled, so most KSE fans just call this album Killswitch Engage II to avoid confusion. But beside that, it’s been 2 years since we heard any new stuff from these guys, and it’s about damn time.

This album is definitely much better than their previous disc. It kicks the shit out of As Daylight Dies, but isn’t quite as good as Alive Or Just Breathing. It’s just as melodic as you would assume (maybe even more so), and just as heavy as you’d expect. Howard uses his screams a lot more often throughout this album than their previous record, which is great, considering his screams are one of the things that makes this band epic.

“Starting Over” was the first song chosen to be made into a music video. It’s clear why the track was picked considering it’s one of the more melodic songs on the disc, and definitely by far the one that sounds most mainstream. While it does sound a bit more commercial than one might like, the tune is still a good song. It sounds like something Guitar Hero might try to put into Guitar Hero 5 once it comes out.

My personal favourite on the album has to be “A Light In A Darkened World”. It’s heavy, melodic, pleasant, and brutal, all in one neat little package. The distortion used herein is definitely piercing; sounds like they’re actually cutting through steel with their guitars. Definitely METAL! Howard’s vocals are just as operatic as usual, which his occasional toss in of brutal growls. The drums, however, are a tad bit on the basic side, which did disappoint me.

On the whole, the disc isn’t a waste. It’s quite good and certainly worthy of Killswitch Engage. Some people may disagree (feeling it deserves higher marks), but this is just an opinion after all. If you prefer KSE’s previous vocalist then I don’t advise this album. But if you like Howard Jones, their recent work or are just a die-hard fan, then go for it!  [ END ]