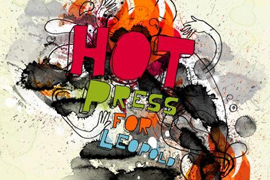 What began as a sort of “musical project” has become the debut record for Los Angeles rockers Hotpress For Leopold. The self-titled release is an eclectic at times innovative collection of songs that appeal to a diverse audience of listeners. I recently spoke with Omar Fadel about the CD, the writing process and the story behind their unique name.

The name of the band is interesting to say the least and sounds as if there is a story behind it. Where did the name come from and what is the story?
Omar: The story is that for weeks we were trying to come up with a name. Long list of bad names, and a short list of not quite as bad names. Above my dining room table is a poster of an Egon Schiele print from the Leopold Museum in Vienna. In addition, hotpress was written in an advertisement in a cooking magazine that was coincidentally left open and there you have it. Hotpress for Leopold. It was one of those names that seemed too long, to random but after a week of dwelling on it seemed to work.

What was the writing process like for this CD? Did you guys all write together? How long did it take?
Omar: HPFL is really just me, and some of the best session musicians in Los Angeles. It is the musical equivalent to a concept car, never intended to be released, but yet here we are. As far as the process went, I was traveling a lot in 2007-2008 and wrote most of these songs on paper and only later did I begin the demo process. The whole process from writing to mixing took a year and a half.

The band keeps things interesting thematically. Can you talk about some of the subjects you tackle on this record?
Omar: Lyrically, most of the songs are funny little stories I picked up here and there. Not be taken too seriously. And on that note… someone sent me a review of the album the other day and the writer said I,I,I,I,Me,Me,Me,Me was a sad and heart breaking song. Nothing could be further from the truth. Really, it is a cocky & ironic song L.A. song about an egomaniac buffoon who always talks about himself. If you have ever been to a party in L.A. then I am sure you know the type. That somewhat sums up the album. Random stories of bizarre relationships, funny dreams and Nova Scotia vernacular.

This record takes chances artistically. How hard is it to take chances with your music in an industry that is declining?
Omar: I am coming from outside of the music industry, having worked in composition for film/TV for a number of years. Because I never intended HPFL to be released to the public, I never gave any thought to how it might be received. All I knew was that I wanted to do something that was the antithesis of my film/TV work. Something light-hearted, simplistic and not melodramatic in anyway.

What is the toughest lesson you ever learned in the studio and on the stage?
Omar: If the song wasn’t right to begin with, and you thought that it get better when you recorded it, chances are you will be let down. If it’s not right in the composition, it will not be right when you pay the big bucks to have it recorded.

What is your musical background?
Omar: I’m Egyptian, and grew up between Egypt and Dubai. So a large part of my musical background is in Middle-Eastern music. But, having gone to British and American schools, and especially having lived in Dubai, I grew up listening to a lot of western music.

What is next for Hot Press For Leopold?
Omar: I’d like to do a metal album. I’m not sure how receptive the label would be to that.  [ END ]