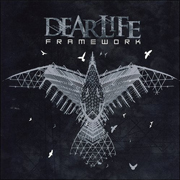 The Hacienda Heights quintet is back at it again, with their release of Framework; their last album with original vocalist Kevin Castellon. Most people can agree, when a vocalist is replaced, the band turns into a tailspin, leaving some fans angered and others intrigued. Formed in 2003 in California, the band turned to MySpace to gain attention of metalcore fans. Their constant persistence and acceptance has led them to tour with the likes of Every Time I Die, Arsonists Get All the Girls, Catherine, Lynch Thy Beauty and maybe most notably Dillinger Escape Plan, among many others.

Framework oozes with energy and every ounce of being from each member. Their effort shouldn’t be doubted, and their talent should be heard. Guitarist Vince Apostle states: “All we try to do is be honest with our music. We play music that we know we would love listening to.” That’s exactly what any album should be. However, what separates this album from the tens upon thousands of metalcore, screamo, hardcore and post-hardcore bands, are the musical elements.

Their song structure is interesting and though Framework’s reoccurring lyrical theme is death (to no surprise a favourite theme to most metalcore bands), their riffs are loud, hard, and the album has a shit load of breakdowns. There are also touches of harmonization throughout the album, and an interesting introduction to some Rap elements towards the end.

This last effort prior to the departure of the lead singer is quite an effort from beginning to end. Like most metalcore bands though, the screams become monotonous and the riffs become repetitive. But to their credit, the album shows promise. How much however can’t be determined seeing as the departure of their lead vocalist Kevin means their “sound” is also gone. Keep an eye out for the new band if they don’t decide to call it quits altogether, they may surprise you.  [ END ]