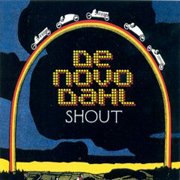 “Ooooohhhhuuuuuoooohhhhh, we have got to let you know” are the first lyrics you hear emanating from the song “Shout (Popple Mix)” off the 2007 Shout EP by De Novo Dahl. These Tennessee rockers came together to write and record this short disc as a teaser before releasing their second full length and follow up to their 2005 debut, Cats And Kittens.

This album is arranged in a specific manner; namely that we get three songs each offered in two versions for a total of six tracks. Being only a teaser for their subsequent full length, they released two mixes of the song “Shout” under the names “Shout (Popple Mix)” and “Crap Your Pants Say Shout”. They also took the song “Sexy Come Lately” off Cats And Kittens and did a mix named “Sexy Mr. Falcon Jive Mister”. “Dance Like David” is a new recording for this EP which was remixed as “Dance Like David Bason”.

One notable thing about this band is that four of the five members contribute to the vocals; which really helps to give the group a party-like sound. Serai Zaffiro, the only female vocalist, can be heard distinctly within the songs. The instrumentals are very simple, but have a positive feel. It is interesting to hear how they take their previous songs and change them in what are very different arrangements.

Shout is a good teaser to De Novo Dahl’s subsequent full length Move Every Muscle, Make Every Sound, released 2008 on Roadrunner Records. While not a solid disc, it is good filler and the band will appeal to fans of The Flaming Lips, The Carnations, Deerhoof, and The Shins.  [ END ]