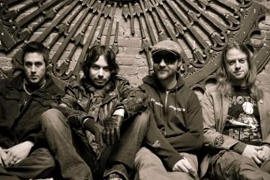 I’ve been a fan of CKY for a long time but have never listened to them as much as I have with their latest album. I sat down for a beer and a chat at the Blue Moon with Jess Margera while they were in Toronto promoting their latest release, Carver City. We talked shop, their latest album, and the future of CKY, check it!

It’s been but a few short weeks since the release of your latest LP, Carver City, how stoked are you now that it’s been unleashed unto the world?
Jess: Very stoked, it seemed like it took forever to do it, I mean, our last record came out 4 years ago so, I mean, in that time, it just seems like an eternity. But, I mean, we definitely had to take our time with it because we wanted this record to have many layers and be kinda like the ultimate CKY album, you know like take everything that we’ve done off our three records in the past and mash’em together and make one giant record…

Alright, cool. I read somewhere that this album was to be self-produced, did end up being self-produced and why did you guys opt to do it yourself as opposed to with a producer?
Jess: Yeah, we’ve done every record on our own. Its produced by Chad, our guitar player and sometimes we’ll have some help mixin’ it and you know, have some outside engineers but for the most part, it’s done by the band and I think that’s the reason why CKY sounds like no other band, ‘cause we make our own albums. You know, whereas, if you hire a producer with a big name, you know he’s kinda got his way of doing everything and then you kinda sound like, you know…

Yeah, he always has to add in his two cents and stuff like that, right?
Jess: Right, right and yeah, you know, you start to sound like all the other bands that he’s recorded because that’s how he does things, you know?

Yeah, cool. Alright, I read a quote by you that said your last album was a “Total guitar record, but this new one will sound like a CKY record.” Can you explain this statement?
Jess: I think our last record, I mean, was very riff-happy and that’s great, you know, I think its an awesome record, I’m glad that we went there but yeah it was all about the riff with An Answer Can Be Found.On this one, yeah, it seems more, um, we get back to like our grassroots stuff, like Volume 1 and Infiltrate.Destroy, I think there’s a lot more like that going on in this one, yeah.

Alright, well thematically Carver City is part fantasy, part autobiography; can you elaborate on this for us?
Jess: Well the whole Carver City thing started from this song called “Boardwalk Body”, that was the first song we demoed for this, and I asked Deron, “Where did you come up with this idea?” He said, we went to Wildwood, New Jersey, which is like this beach town, but in reality it’s pretty terrible, there’s a lot of crime and basically Philadelphia by the beach like all the hoods from North Philly come to Wildwood and party, you know? It’s pretty crazy! So he’s walking home from the arcade with his friend at like midnight on the boardwalk and right by his hotel there’s just this dead girl. [let’s out a small laugh] so…

[laughing]: Okay?
Jess: Yeah! And he’s like thinking, you know, when you’re twelve that’s pretty traumatizing, I imagine, and yeah it’s supposed to be a happy place at the beach, and things didn’t turn out too well for her, you know? She didn’t have a good time.

No! That’s for sure! Okay, well I heard that you guys were going to film the studio sessions for this new record in hopes to release it on DVD. Is this true and can you expand on that concept for us?
Jess: Yeah I think we filmed a lot of the recording and it would be nice to do something with it but you know, videos are tricky because we know how to make albums but I’m not very good at video editing and as far as I know, neither does Chad or anybody. So We always need to have someone help with videos and to be honest with you, I think all of our DVDs could’ve been better but our music video, I love all the music videos, but the actual behind-the-scenes and stuff of our music video DVD, it was rushed and didn’t turn out great. We put out a live thing, it seemed more like a bootleg though but, you know, it would be nice to see like a concert filmed with like good cameras you know, instead of just DV cams.

Yeah, so for the music videos, do you do that yourself as well?
Jess: Um, we did probably about 12 of them with my brother; we did one of them with an outside director, which didn’t really work out so well ‘cause its like. You know [starts laughing] it’s like…

The same thing with the producer?
Jess: Yeah! I mean, this guy probably just heard of our band a month before or something, you know and he has no idea, you know, its just music, you know, and my brother, he’s been there since the beginning and he knows all about us and he knows what we want. It’s easy to explain him what we’re after and we just did “A#1 Roller Rager” with him, and it turned out really cool.

Nice, nice. Okay, well back in December of 2006 you guys signed to Roadrunner Records, what brought about the label change, why Roadrunner and how does it feel being part of that family?
Jess: Well, we were on Island Records for five or six years and we kinda just got tired of them always wanting to use our connections, you know, all the time. It’s like, they didn’t really do much for us, I mean, they would give us money here and there and you know, do stuff like that but, I mean, overall, they didn’t push us. They used what we built and tried to cash in on it which is so annoying. So it came time to do this Carver City record and Island wanted to do it and we’re just like “What’s the point?” I mean, at that point they were even admitting like, “Yeah, we’re just gonna do what we’ve always done.” [laughing] You know, a little radio would be nice! [Spencer laughs] You know, like some ads in some big magazines and shit! So we signed with Roadrunner because, they almost signed us in ’97 or something, and we’ve been wanting to work with Monty Connor, the guy who signed us, for a long time because he’s been a huge fan of us since, I mean, in high school, when I was in high school and he was following our band. He never signed us until recently. He said as soon as Infiltrate came out he realized it was the biggest mistake he ever made to not sign us. Yeah, so here we are and now he has his chance. [both laugh]

Nice! So you guys are booked solid through August, are you off after that or is the touring continuing indefinitely for now?
Jess: We’re gonna take a break for a little while in September, Deron’s having a kid so, we’re gonna tour all summer then do some family time. It’s definitely tricky to be touring when you have kids…and stuff. You know, we used to get off for three months at a time, now its more like three weeks at a time. Then we’re gonna probably do some more dates in October, and do some Europe and stuff like that.

You guys did a live taping at MTV Canada yesterday, how’d that go, and what exactly went down?
Jess: It was fun! We got to play three songs; me and Chad did an interview on the roof. It was pretty funny, they asked a lot of interesting questions and stuff and we talked about that fight that we got into and they’re gonna animate it [both laugh] so yeah, I think it should be pretty funny!

What’s this fight you got into?
Jess: Yeah we took a break; actually we broke up for a year, during the making of this album. ‘cause just ten years of touring caught up with us and Deron had some alcohol problems and stuff that he had to beat and yeah, we were on the road, I think it was St. Louis or something and we just beat the shit out of each other [ laughs]

Oh man!
Jess: It was very necessary I think ‘cause you know, when the band’s over, or at least in our heads, for a year it makes you really realize how lucky you are to be doing this and why piss in the well?

Yeah! [both laugh] So obviously you’re glad that you’re all back together and settled your differences?
Jess: Yeah, well it gave us like a new found, fuckin’, you know, it was like brand new again. It felt like we were doing our first record I guess.

Clean slate?
Jess: Yeah, I mean, everyone’s just like “Hey let’s fuckin’, this is bull shit! Let’s start over.” you know? And we didn’t even talk about the past or anything, I just made the record.

Nice! So do you have any last thoughts or words?
Jess: Uh, thanks for doing the interview and I’m stoked!