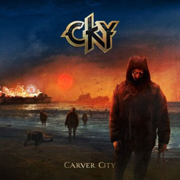 After four years of silence CKY is finally once again wreaking havoc. What have they been doing while their fans waited? Drugs? Alcohol? Taking a sabbatical? No one may know, but one thing is for sure, they’ve been working damn hard on their latest record Carver City.

According to a recent interview conducted with the band’s label, by Roadrunner Records, CKY announced that they took a one year hiatus. Well it’s good to hear that after their mini vacation from each other, they were able to once again record a true CKY creation. Thematically, the new album is about an imaginary town in New Jersey called Carver City. The town has a history of bad luck and misfortune which is told all through the songs on the album. Might not sounds like a wonderful vacation location, but how cares?

True to their name, CKY has stuck to their roots, ripping off some of their best riffs to date. Compared to previous albums, Carver City has catchier songs which bring with them a more mainstream feel. The tracks “Hellions On Parade” and “The Boardwalk Body” are bold demonstrations of their new sound. While the bass and drums on this album are simple and follow the guitars lead, the vocals are noticeably softer than what you would have heard on previous efforts. One might argue that overall, CKY has calmed down considerably from past releases.

This is definitely an album that could work with radio, but sadly has not been taken up by the airwaves as well as it should have. Its fresh sounds were well worth the four year wait and a vacation did these Chicago boys a world of good.  [ END ]