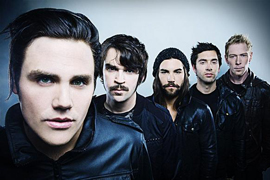 The guys in After Midnight Project have had a very busy year. They released their newest disc Let’s Build Something To Break to critical acclaim and they have been touring as part of the Van’s Warped Tour this summer. I was able to catch up with lead singer Jason Evigan who was getting ready for a show in Orlando, Florida.

Different groups have unique ways of writing their songs. How do you guys go about writing your music? Is it a collective effort or is it more the efforts of one particular member of the band?
Jason: On this album I wrote all the songs over the past 5 years. I write all sorts of ways. Usually on an acoustic guitar or a piano. I sometimes just write poems and turn them into songs. I also love going into the studio and making a crazy ass beat and then just write guitar riffs over it and then go from there.

Every band has its musical influences. What are some of the other bands and artists that have greatly influenced you guys and your music?
Jason: Cat Stevens, Korn, Deftones, Rage against the machine, Kenna, Postal Service, Pantera, Muse, My Chemical Romance, Nirvana.

Your brand new CD titled Let’s Build Something To Break is set for release on August 11th. Now that it is complete how do you feel about it? Are you satisfied with the outcome?
Jason: I could not be happier. It came out the way we wanted. We had so much fun making it. There were no boundaries. John Feldmann is such a great producer and easy producer to work with; he really saw our vision and helped us follow it. I think you all will really like it.

How is the Warped Tour going so far? Are the crowds receptive to your music?
Jason: So far so good. It is funny how it works. We always start with a hand full of kids wearing our shirts in the front row. And two songs in to the show the place fills up. Our label as well as ourselves were a little unsure how the crowds at Warped would respond to us. The most common thing the kids say is “wow your music is refreshing”. That makes me really happy.

Give us some insight into the record and the meaning behind its title?
Jason: Well about three years ago I was sitting in my friend’s living room writing a song. I had just got out of a super long relationship. I could not believe after all that I put into it I just broke it down. I started sing the words “Lets build something to break” I said to my friend “that would be a sick title for an album” years later things kept happening in my life that related to those words. So after the album was done I was like hey I want to call this album “Lets Build Something To break” It’s kind of a sarcastic jab at how I have lived my life.

The band keeps things interesting thematically. Can you talk about some of the subjects you tackle on this record?
Jason: I talk about being on the lonely road away from the people I love. I talk about the war in one song, “The Criminal,” I tell a soldiers story of being over there. I talk about growing up in Hollywood and the not so glamorous side of it. I write about just the struggles of growing up and finding out who you are, losing people you love and falling in love. Pretty much the album is a little diary of my life the past 25 years.

When you are on the road for a while I am sure you see and experience many different things you might not even have known existed. Are there any stories that stand out in your mind as being exceptionally strange or odd?
Jason: Nothing stands out as being odd. I meet a lot of really great people with great stories. I love seeing the different ways people talk. The different types of foods. I mean some cities have fewer teeth than others do. There are odd things every night at an After Midnight Project show. I think I’m becoming immune.

How do you maintain that level of energy and exuberance? You sound like you’re ready to go full bore every time you hit the stage.
Jason: I sometimes walk on stage with no energy I don’t even want to be up there. But the second the crowd screams and our intro starts, it feels like the first time every time. The music and the fans keep me going every single day. We all do work out and try to stay healthy. I like to run a few miles in the morning when I can.

What song from the CD is the most exciting for you to sing?
Jason: I love singing “Gone to Long.” It’s one of the ballads and I play piano on it. Every time I sing it I just go into this place in my head. I see the ocean I see mountains and fresh air. But I get sad when I sing it though. It is about being away from my love, and forgetting the simple things. But there is a little happiness in the pain. It’s a weird emotion every time that song starts.

What is next for After Midnight Project?
Jason: August 11th Let’s Build Something To Break hits stores. We have some really big radio shows with Tool, Linkin Park and Korn coming up. The future looks really fun and exciting I can’t wait to see where it takes me.  [ END ]