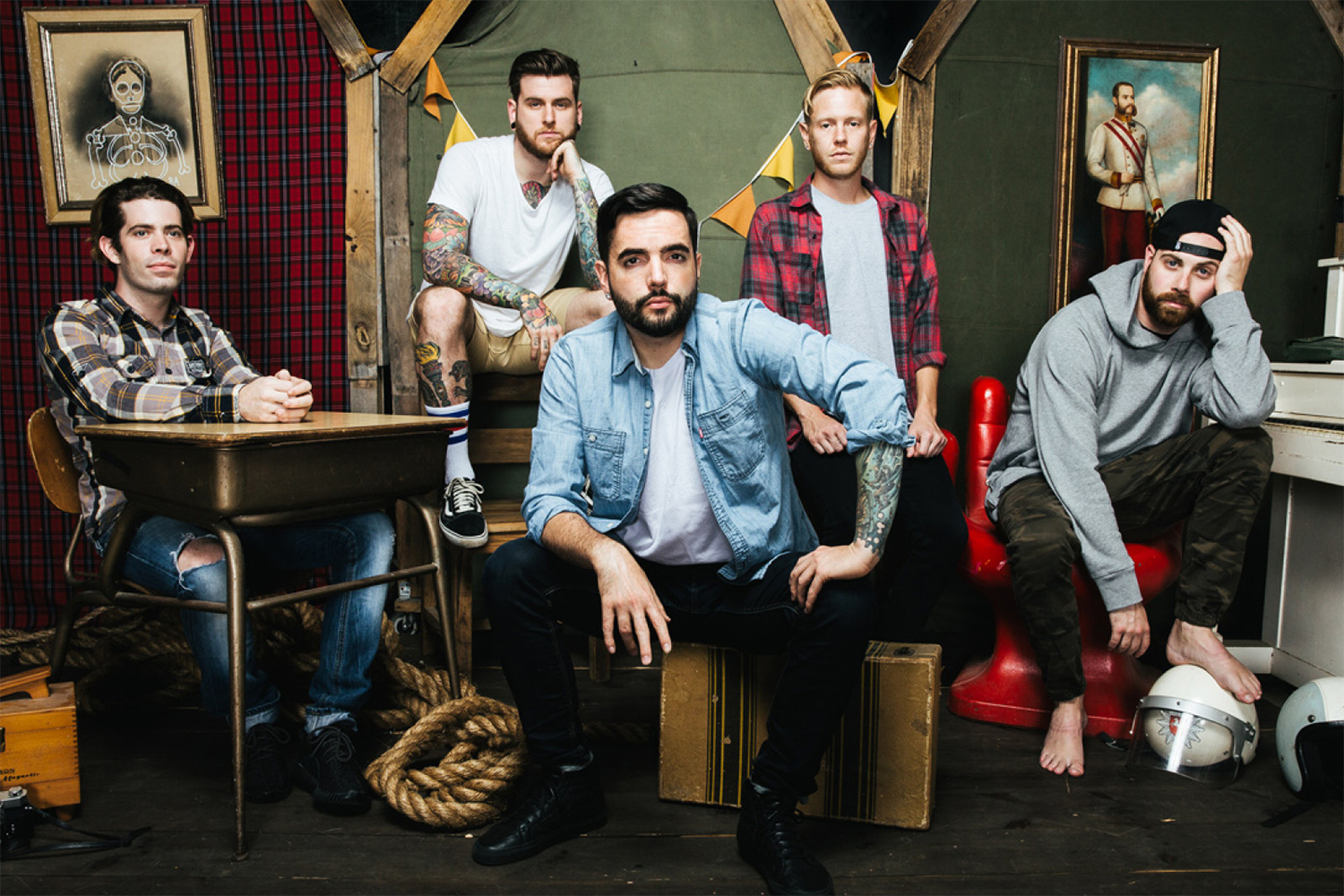 Before Warped Tour had initiated, A Day to Remember was touring with The Devil Wears Prada and promoting their latest release Homesick. I had a chance to catch up with Neil, who decided to play a joke and invite Paul, TDWP roadie, to sit in and pose as a member of ADTR. Little known to him, I had seen Paul loading in TDWP’s gear out of their bus; so I decided to play along and see where it went. Unfortunately, we did not get to follow-up at Warped Tour, however, we managed to talk about their new album, what to eat on tour and the tension between ADTR and fellow Florida band, Black Tide.

Your album just dropped over a month ago, what has the response been like so far?
Neil: Uh… Paul what do you think?

Paul: The kids have been really stoked at, like, the shows and you can tell they’ve been checking out the new stuff and they really liked it, kids have been diggin’ it. So, can’t complain.

Neil: I couldn’t agree more myself.

Alright, cool man. Now, AP voted you guys as the Most Anticipated Album for 2009, how does it feel when you hear that statement?
Neil: It makes me feel really good inside.

Yeah? [everyone laughs]
Neil: I mean it’s kinda like being voted, I don’t know, I don’t even know. What do you say it is? How do you answer this question? How would you answer it?

Paul: I mean, it’s an honour, I mean, some of our favourite bands have been in there, you know, back in the day, NFG, Blink.

[laughing] Okay, well after listening to some of the new tunes on MySpace it’s evident that you guys are way tighter as a band. How do you feel about the new tunes?
Neil: I feel the new tunes are jammin’, pretty sweet, pretty fun to play live. Yeah, that’s about it.

Alright, cool, so I can see we’re all the same wave length then.
Neil: What wave length are you on?

Oh, I guess I agree too, I guess we’re all agreeing. [laughs] In a scene where almost every band sounds like pretty much the same, how do you guys manage to stand out so well?
Neil: I think we just kinda, do what we want and if anyone says no we say, “Fuck you!” and do it anyways.

[laughing] Definitely the way to go! You guys have done a couple of cover songs like Kelly Clarkson’s “Since You’ve Been Gone” and more recently “Over My Head” by The Fray. Is there a specific reason for doing this or are they just super fun to play?
Neil: The first one was a joke and then the second one was more like they asked us to do it and then so we figured, “Yeah, I guess we could do that.”

The Pop Goes Punk…?
Neil: Yeah, they did.

So they asked you to do that one specifically?
Neil: No, they asked us just to be on the thing and they gave us like a list of songs that we could choose from and like, that was like the easy – like we felt that like, that song is really like catchy and it’d be really easy to make it sort of something that we could play or make sound good, I guess.

Alright, cool. Well I know everyone out there will be singing along tonight to both your new and old songs. Does it make you feel like you really accomplished something when you hear this?
Paul: Yeah, for sure, I mean we’ve been blessed to be where we are and the kids that come out to the shows like the new stuff and we like playin’ it for them and, you know, playing music to people around the world, so, you know, can’t complain.

[laughs] Okay. Do you guys expect the same response when you guys hit up Europe in the fall?
Neil: We just came back from Europe actually and it was some of the best shows we’ve ever played. Germany was like, all the shows were sold out and hopefully when we go back they’ll still like us.

Hopefully, yeah. Do you guys enjoy playing over there and how does it compare to playing over here?
Neil: It’s about the same as to playing here because except your phone doesn’t work. [everyone laughs]

Yeah in the shadows though, it’s really cold.
Paul: Like Story of the Year?

Neil: Yeah, I was gonna say.

Story of the Year?
Paul: Yeah, “In the shadows of the night”.

So, uh [Spencer trips over his words and jokingly says “so” repeatedly]
Neil: [looking at Spencer’s Black Tide wristband] You like Black Tide?

Neil: They’re from Florida too, I think. And they were up for a Kerrang! Award whenever we were and they won and we lost.

Oh, well that’s a shame.
Neil: There’s a little animosity between us. We’ve got some beef.

[laughing] How does it feel to lose to 16 year olds?
Neil: Pretty good, I’m gonna probably kick their ass when I see them next, ‘cause they’re 16. [everyone laughs] If they were older I’d be a little nicer about it.

Oh, okay.
Neil: But since they’re young, fuck them! [everyone laughs] Just joking.

Okay, well speaking of younger bands, I have a fan question here. The boys from a band from around here, Hasket, they want to know since they’re planning to tour once they finish high school, what would you guys recommend eating on the road, and what do you guys eat yourself?
Neil: Eat a lot of girls out, as many as you can.

You don’t have to do that on the road though.
Neil: Yeah you do. [Spenny laughs] Yeah you do. Um, don’t hook up with girls unless you’re eating them out, that’s my advice for them.

Is there anything else you recommend not doing for bands in that position?
Neil: Don’t ever use condoms!

I hear syphilis is going around pretty well though.
Neil: Well once everyone gets it; it’s not a disease anymore. [everyone laughs]

Okay, cool, well good luck tonight guys, thanks for the interview and I’ll catch you guys on Warped Tour.
Paul: Thanks man! Hopefully we can do another interview!