Most people seem to think that Wheatus were just a fairly unpopular pop rock band with a singer who sounds like a girl, who had one mildly entertaining song (Teenage Dirtbag, in case you don’t remember) that had Jason Biggs in the video then disappeared into oblivion. Well, I was one of the millions of kids back then who LOVED that song. To be honest, I loved the band in general. So it pleases me greatly to be able to tell you that Wheatus didn’t fall into a black hole never to be seen again. In fact, they’re in Northport, Long Island. Granted, they’re still a fairly unpopular pop rock band, and yeah, the singer still kinda sounds like a girl. But they’re still making pretty darned good music.

After a distinctly unamicable parting with their record label Sony, Wheatus’ third album, Suck Fony (a re-release of the second, titled Hand Over Your Loved Ones, which was re-branded and released independently) failed to make any impact on the charts. Which is a shame really, because it features some great songs – “Lemonade” and “Whole Amoeba” to name just two.

In 2005, the next album was released. Too Soon Monsoon was a much more mature sounding record, featuring some longer, vaguely prog-inspired tracks – “No Happy Ending Tune” and “This Island” come in at 5:37 and 6:04 respectively. Singles from this album were “BMX Bandits” and “The London Sun”, which were printed on a limited run of 7in vinyl. Which brings us up to date. And Wheatus’ latest outing – The Lightning EP, Volume 1 of a series of EPs, a collection called “Pop, Songs & Death”.

With only six songs on an EP (available for free download) by a pop rock band, you’d be forgiven for thinking this could be a pretty short, pleasant listen. Interestingly, it’s turned out to be a fairly grown-up sounding record, almost difficult to listen to, and due to a lengthy outro on the 11+ minute long “From Listening To Lightning”, the whole EP clocks in at an impressive 39:00 minutes.

The one thing that stands out about Wheatus’ songs is the way they ‘sound’. All the instruments in the band are electronically generated sounds, MIDI controlled with an impressive rack of hardware including a specially constructed rig by pro audio gear manufacturer Manley. I couldn’t tell you what it does, but I can tell you the setup looks pretty cool. And to be fair, it sounds good too.

The Lightning EP was recorded using “super audio” on a console by Sonoma, which creates DSD files, a format with sound quality apparently even better than vinyl. Naturally, it’s still compressed as you’d expect from an MP3 file, which is the version I have (it’s also available in Windows Lossless, Apple Lossless, FLAC, and DSD and can be played on a PS3) but even the MP3 version has a great sound quality. It’s mixed well, and the arrangements are unusual enough to keep it interesting but are subtle enough to make it all feel pleasantly familiar.

That said, it takes a good few listens to “get” this record, other than “You And Your Stoopid Guitar”, which is a brilliantly infectious pop song. “Now” is a pretty but sad track that features in the independent movie “April Showers” about the Columbine disaster, “Real Girl” and “Texas” are also quite slow, but have enough guts and power behind them to avoid them feeling sluggish.

It seems that a lot of people still judge Wheatus on their earlier songs, which is more than a little unfair as Teenage Dirtbag was out almost ten years ago, and since then Wheatus have grown up a lot. They’ve endured lineup changes, been mangled through the major record label machine and have established themselves as a completely independent band, from the songwriting, through to their production and tour management, they admirably do it all themselves. Their inimitable sound and unique approach to music is both refreshing and inspiring, and The Lightning EP is the perfect celebration of their longevity and musical progression. Here’s to another ten years.  [ END ] 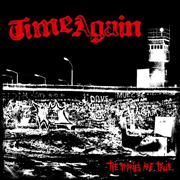