Included in this year’s Van’s Warped Tour line up was Saosin, a band definitely worth the spot. Over the years, this group has fought their way up the ladder of achievement. Sharing the stage with headliners such as Avenged Sevenfold and My Chemical Romance, Saosin has earned themselves a legion of followers. Through all of the Warped chaos, I was able to catch up with vocalist and guitarist Beau Burchell as well as bassist Chris Sorenson to ask them a few questions.

So how’s the tour going for you guys so far?
Chris: So far the tour is going pretty good. We are on the Warped Tour, obviously, and with that comes hot summer days, catering lines, sandwiches. Sometimes we’re early morning sets, sometimes we’re late night sets. So we’re just really getting into the swing. I think we’re only like… in the beginning of the third week. We’re still developing.

Any good tour stories to share?
Chris: Absolutely none. No.

Beau: Actually, there was a pretty cool story the other day. We ended up riding our bikes to a hotel, which we won’t name names, and there was an indoor swimming area. What happened was, there were two people working out in the work out area, and one of the guys tattled on us for being there using the pool. And then the hotel manager comes out, and the girl she comes out through this door standing in front of a HUGE wall of towels, and decides to break the ice by saying, “Do you guys need anything, like towels or anything?” And she’s trying to make sure that we belong at this hotel. Anyway, we tricked her into thinking that we were staying at the hotel, and then she ends up offering us all like a suite to go back and shower at, you know. Basically offering us free suites. But we ended up not taking them because we wanted to ride our bikes a little bit more. That’s about as exciting as it’s gotten so far. Boooorrringgg. [laughing]

Have you guys made any new friends?
Chris: Unfortunately we already have a lot of old friends on tour, so we’ve kind of grew this clique of us, Senses Fail, Alexisonfire, Anti Flag, and Underoath. And we’ve deemed us the new-old guys because we’re kind of… I wouldn’t say we’re like seasoned, since NOFX has been on like every Warped Tour for the past 15 years. And now there’s a bunch of new bands that are doing really well and this is their first Warped Tour and stuff.

Do you guys enjoy watching other bands in your spare time?
Chris: Yeah. We watch Innerparty System a lot. they’re a band from Pennsylvania, and they’re definitely putting on a non-typical Warped Tour set, which I think is pretty hard. Alexisonfire is putting out a new album after being away for a year, so they’re playing some new songs, and that’s really about it.

How much time do you spend with your fans here?
Chris: A lot. We just actually before we did this we were out signing for about an hour. We try. At Warped Tour you can take advantage. There’s more time to meet fans. We do maybe the bare minimum, but I think we do as much as possible.

Is stage performance still a top priority, even in the hot weather?
Chris: Even more so, I think. because there’s so many other bands, and if you don’t put on a good show, and convey the energy you want your music to be, then kids are gonna move on to the next stage.

Do you feel the band has changed your lives for the better, or were you not expecting it to take off?
Chris: Definitely everybody in the band knew that there was a chance that we weren’t gonna make it to where we thought we could go. But we went places we never thought we could go, and I think that’s important. And we’re gonna go more places.

Why did you guys choose not to promote yourselves in the beginning?
Chris: Because promotion is a different facet of the industry. And we were more about the music because we didn’t have anything but the music, and we wanted to make sure that kids listened to the music first, instead of getting caught up in mundane stuff that goes along with promoting your band. The drama, and anything. We just wanted to have the music speak for itself.

Looking back now, what would you say is the biggest accomplishment for the band as a whole?
Beau: I would say, granted the fact that we’ve been able to tour so much, and actually be… not necessarily legit, but a band that’s been doing real shows for almost five or six years now. That’s, I think almost a long career. I think the fifteen minutes of fame that was there, is almost now like a thirty seconds of fame. That’s really the chance for bands to get really huge, and then just done. And then they jump ships, and go on to the next band. I think we’re definitely really lucky with fans that have supported us over the years. great, great fans.

Are you hoping to replace that accomplishment with an even bigger one, or are you happy where you are?
Beau: I’m happy where we are now. I think that we kind of take things day by day, and we don’t really expect anything, which is probably why we appreciate things as they come. So we appreciate everyone that shows up to the shows, everyone that tells us a song saved their life. 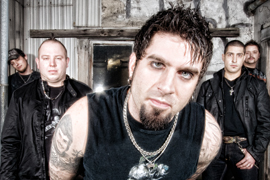 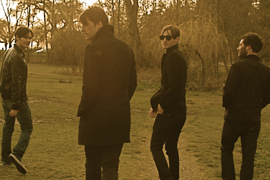