When you’re talking about the top five metal bands of all time, most people would probably agree on a few key names, Judas Priest, Metallica, Megadeth and Testament. Although not as commercially popular as the other three aforementioned bands, Testament is widely considered one of the true innovators of thrash metal that has influenced so many metal bands today. After twenty-six years together, the group is still together despite several line-up changes over the years. The band’s ninth album The Formation of Damnation came out last year and they are yet again out on another tour this summer through Europe before going to Japan in September. Recently we had the very special opportunity to speak with Testament guitarist Alex Skolnick about all things Testament. Here’s how the conversation went…

Testament has been together as a band now for over twenty years. How does it feel to still be doing this today after all these years of making music and being out on the road?
Alex: Well for me it’s very different than if you asked anybody else because I was gone about half that time so for me it feels like we’ve been together, you know seven years and then the last few years. But you know, it is really cool to be doing it in this day and age because there are a lot of young fans that are really appreciative of it and that seems to be growing. And it’s also a type of music that’s been written off many times but it always seems to come back.

You recently wrapped up the “Priest Feast” European Tour with metal legends Judas Priest and Megadeth. Looking back on it, how did the tour go? Were you pleased with how it turned out?
Alex: Yeah it was really good, all the bands have never sounded better. And um, in a way it was kind of like a mirror image of the tour we’re doing right now with Unearth and Lazarus A.D., that to me is three different generations of bands. You know we’ve been around a little bit longer than Unearth and Lazarus A.D., it’s only their second tour, they’re a new band. In the case of Priest Feast, Priest have been around since the ‘70s, Megadeth started in the early ‘80s, they already had a couple of albums out before Testament even started so we’re like the new band on that tour even though we’re not new. [laughs]

You have a very extensive North American tour starting next week with Unearth and Lazarus A.D. How did these bands end up getting added to the bill?
Alex: Well you know we looked at a lot of different bands and did a lot of listening, you know a lot of bands were submitted for the tour. And I guess… Unearth is a band that really doesn’t need us to tour, you know they’re doing just fine on their own but they were going to be on tour at the same time and instead of competing with each other, we decided to join forces. We’re more than happy to take the support slot which is really cool of them. And I believe Lazarus A.D. is on Unearth’s record label so I think that’s how they were submitted. It just made a lot of sense, people aren’t as familiar with Lazarus A.D. but they’re doing great, they’re delivering which is more important than having recognition.

You released your last album The Formation of Damnation now about a year ago. Now that it’s been out a year, how do you feel about the album now? How does it match up to the rest of the Testament catalogue?
Alex: Oh I think it’s definitely one of the best if not the best recordings we’ve done, you know definitely sound wise. I think it’s good that it fits in with today’s climate of metal and um, you know I think some of the other albums suffered from production issues and that definitely wasn’t the case with this one. And then some of the other ones were rushed so there were writing issues and I think this one, you know the production was solid and enough time was taken to make it as good as it can be.

Now I read recently that you’ve recently started writing new material for the next Testament album and you had about four songs already. Where are you right in the writing/recording process and what can we expect in terms of its sound?
Alex: Well I think everybody’s got ideas right now, it’s really the initial stages, I wouldn’t say that there’s anything complete yet, I think it’s too early to tell. But I think by later on this year we’ll have a better idea about it and its sound.

Over the years, aside from yourself and Eric, Testament’s line-up has changed several times. Are you pleased with the band’s line-up now? Do you think it’s the best Testament line-up you’ve ever had?
Alex: This is a really solid line-up, yeah it feels great. There’s no question, it’s got the integrity of the original, classic line-up, but we also have Paul on drums who fits in and comes from the same genre, the same time period of music. It’s just really solid, with all due respect to our former drummer Louis who’s still a good friend, you know Louis was not somebody… he probably wouldn’t be in a band, when he left us he didn’t continue playing drums. He really played because of this band, he wasn’t somebody who was going to be a drummer no matter what. Paul is one of those guys who’s going to be a drummer no matter what and could be hired by bands like Slayer and Exodus, you know like he’s on the short list of guys who are great drummers and he’s so solid. So to have somebody like that is great, it’s definitely the way to go.

What is the writing and recording process like in the band? Do you all write together or is it more just the efforts of yourself and Eric Peterson?
Alex: It’s always different, it’s different on every album, it’s different than it used to be in the old days. You know in the old days, Eric and I would mostly get together and put riffs together and Chuck would write over that. Now I live over on the East Coast and I’m involved in a lot of other projects so Eric and Chuck are more of the core writing team. I present some ideas here and there and they use the ones they like and in some cases I’ll present a whole song like the song “Fear” which is the second last track on the album which got picked. You know every other song, it’s different, you’d have to talk to those guys more about the majority of the songs because they’re the core writing team.

The group has a lot of tour dates scheduled from the beginning of May right through into August. After so many years together and so many tours, do you ever just get tired of being on the road so much?
Alex: Absolutely. I think everybody does, you get tired of it, you need breaks. But next year, we’re not going to be in this album cycle, the album cycle is winding down so next year we’ll be more about working on the record, getting the record done and sure some tour dates, but nothing like this year. It’s been like six weeks here, a couple of weeks off, six weeks there, a couple of weeks off.

So definitely not as crazy then?
Alex: No, once the following record comes out then maybe it’ll make sense to tour like that.

You have a busy summer ahead of you but what does Testament have planned for the fall and then into 2010?
Alex: Um, let’s see the fall we’re going to Japan and South America and then for the rest of the year, these guys will get started on the record and I’ll be on tour in Europe with my jazz trio for the months of September and October and then I’ll be with the Transiberian Orchestra. And then at some point we’ll re-convene in 2010.

So could you see Testament going on for years and years to come?
Alex: If there’s interest then absolutely. I’ll be honest, if the interest declined and it became more like a garage band and had to tour in vans because we couldn’t afford to tour comfortably then I don’t know. But the way it’s been going it’s been building, we’re able to tour comfortably and the audience excitement is there and there’s no sign of that changing any time in the near future. 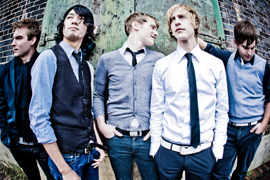 Norglen: “A Long Way From the Truth, Not that Far From Success”