The third full length from Dance Gavin Dance, Happiness, drops less than a year after its predecessor, making it easy to label the band as prolific considering the term applies to quantity over quality. Still, despite the small window between releases, the band’s latest isn’t half bad, offering a much different sound to previous releases that fits the band well. That is, when the band’s at its best.

While previously, Dance Gavin Dance fell into the upper half of the sing/scream outfits more than abundant throughout the current music scene, Happiness finds the band dwelling more on its strengths – namely the twinkling guitar interplay and consistently fresh and driving drumming – to create a more original and trademark sound. “Tree Village” and “Happiness” are great examples of the band delivering the right amount of the right elements for some shining highlights. The former carries quite a pulse, with some great upper-register vocals from Kurt Travis and the guitars giving the track a Choke-like feel (forgive me, Lord). The latter nails the balance between atmospheric guitar noodling and soaring vocals, with a huge chorus where the guitars open up and let the vocals shine through like sun on a cloudy day.

These two highlights coming within the first half of the record, the album is bottom-heavy in a big way, with the final 5 tracks not offering much of note. The screamed vocals really take away from what the band builds melodically throughout the entire record, even chipping away at the otherwise excellent “Tree Village.” As previously noted, the instrumentals are what often what propel these tracks, and the production is complementary to this. The issue, though, is that there’s not enough variance in what those instruments are doing to give each track a distinct feel. Tracks like “I’m Down With Brown Town” and closer “Powder To The People,” (among most others, unfortunately), just don’t command attention the way the band has proven it’s capable of doing. “Strawberry Swisher Pt. 1” and “Don’t Tell Dave” take on a Jamiroquai vibe, the first resulting in disaster and the second resulting in a cool number, but one that doesn’t really fit into the album as a whole.

While the majority of the tracks feel incomplete – as though there’s more than a few elements missing, they are by no means poor. Dance Gavin Dance boasts quite a talented lineup that proves on a few tracks and parts within others that they’re capable of creating some catchy, driving post-punk. Unfortunately consistency is lacking on Happiness. If the band is able to pick up the right pieces from this outing and compile them properly for the next, then we may be onto something. Considering the growth they’ve made thus far, I’m not counting them out.  [ END ] 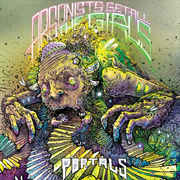 Arsonists Get All The Girls – “Portals”