Taste of Chaos is known for its awesome line ups; this year that line up included Toronto’s own Cancer Bats. I had the chance to chat with drummer Mike Peters about free Rockstar, the lack of alcohol in their Rockstar, how to prepare for a tour and Scotty’s new phone.

So how much chaos will I be able to taste tonight? Badoomcht! [both laugh]
Mike: Um… probably… I don’t know! We’ll see how much chaos, it’s gonna be pretty chaotic I think.

Okay, well you guys have today and tomorrow and then Taste of Chaos is over, so how was the tour for you?
Mike: It was awesome! Yeah, it was fuckin’ really fun. It was, it flew by. It’s long, you know, I’ve been gone for a long but it just flew by, everyone had a good time, I think, you know, met a lot of people on the tour, made a lot of good friends.

A lot of kids out every night?
Mike: Yeah, it’s been good. It’s definitely been really good for us, I mean, we’re not, the States we haven’t toured that much so, to play in front of big crowds every night is awesome!

A lot of free Rockstar?
Mike: Yeah, I don’t drink that stuff. But the coffee one is really good.

Yeah you were saying that. So you’re looking for an endorsement on that now? Are you paid to say, “The coffee one is really good?” [laughs]
Mike: No I don’t, I drink the coffee one, the other ones? They’re good, they’ll keep you awake and they’re actually not bad tasting. They go well with good… they go good with whiskey. [both laugh]

What about the Rockstar Vodka one?
Mike: They have one?

I’m sure I’ve seen that.
Mike: They don’t have it on this tour.

Aw, well that’s a shame!
Mike: That’s what I’ll be saying. Is it Redbull? Might be Redbull.

No, it’s definitely Rockstar, it’s like, and you can drink it outside ’cause it looks like a Rockstar can, so…
Mike: No way!

You won’t get in shit for [drinking in public].
Mike: Hell yeah! I wish they had that on this tour! That’d be awesome!

They were probably like, “We don’t want you making us look bad by playing drunk on stage.”
Mike: Yeah, there’s lots of little kids on this tour. The dude bros would be drunk every night.

For sure man! Well, you guys are about to hit up, Europe and then Australia, have you been to either of the continents before?
Mike: Yes, I’ve been to both. Except we’re going to New Zealand this time, which we’ve never been to. We’ve been to; we’re just going to England on this tour, and Ireland and Scotland and Wales. So, the UK, generally and we’ve done the UK a lot, it’s gonna be really fun. It was supposed to be an In Flames tour but it got canceled so we turned it into headlining shows. And Australia we’ve done once before but it was really short and this time it’s a bit more extensive, and then we’re doing New Zealand as well, which I’m fuckin’ stoked about!

So what’s the response been like over there as compared to here?
Mike: It’s been, I’d say, like the response over there, in terms of England, it’s been really good, kinda similar to Canada. Canada’s definitely been a bit better, but England’s a close second, let’s say that. Then Australia is good, but we just did headlining shows and we only did three so it was kinda weird; and this time we’re going with Bring Me The Horizon, supporting them, and their shows are like 100 times bigger [both laugh] you know? So its gonna be fuckin’ awesome, I’m super stoked!

Nice! So how do you prepare yourself for a trip across the pond and down under?
Mike: Uh, just keep goin’! Don’t stop when I’m at home, you know, just keep partying.

There was no innuendo implied there.
Mike: I know [both laugh] but just, I don’t know, pack light, so you know, we don’t have to carry a lot of stuff.

We’re opposite [seasons].
Mike: Yeah, like we’ll be there in May. But I’m hoping that I can maybe try and learn how to surf. That’s my goal.

It’s probably like; this is me guessing here, like the same thing, just a little bit colder. I don’t know, I’ve never been there so.
Mike: Yeah, someone was telling me that it actually gets kinda cold in their Winter.

Does it snow though?
Mike: No, I don’t think so.

Are you gonna pack a jacket just in case?
Mike: I’ll probably bring a jacket ’cause England’s always cold…

…and rainy.
Mike: Yeah so I’ll have a jacket. See that’s the thing, and what I had to do on this tour too, is pack for all these different seasons ’cause I left Toronto February 7th and drove straight to LA, where it’s hot, and went back to like, came back to this part of the country. You know we did Detroit, New York, and all that there’s cold and then I went down to Florida and then it was hot, and then went through Texas, and it was hot and then back to Canada and then it’s been cold. So I had to have like a winter coat a pair of shorts, you know what I mean? It’s like multi-season touring, it’s not as easy as people think it is.

Oh no, definitely not. Liam mentioned back in November that you guys were working on a new album in January when you guys had some time off, how’s it coming along?
Mike: It went well, in January? We had a month off and we wrote four songs, part of a fifth. And then we kinda did, well then we started this tour and we had plans and hopes to keep working on it and I think, you know, mentally, in our brains we all worked on it but it was kinda like, definitely we didn’t sit, we never had time where we had sound check or anything where we could actually sit and jam out songs you know? It happened maybe twice on the tour then just being in the van all the time and driving it’s just like, it’s hard to get it all done, you know?

So when do you guys plan to hit up the studio?
Mike: Hopefully September. We have ten days off now, and then we go to England, so hopefully in that 10 days we’ll get a little bit of jamming in and try and write some songs and then once we get back we have the whole summer off. So we’re just gonna lock ourselves in our practice studio and hopefully come out with something good.

Nice, so the songs you’ve been working on, how does that compare to the stuff you have out now?
Mike: They’re kinda similar in ways and different in ways like it’s still the same kind of, you know upbeat kind of punk metal stuff. I think we’re just trying to figure out where we want to take it, you know, it’s early stages of it all. You know, so we’ve written four songs but it’s like, we’re hoping to write fifteen to twenty songs and then whittle it down to twelve or whatever, you know what I mean? So it’s like, you get four but they seem really good now, you know, but it’s whether they stand the test of time of three months of jamming and stuff like that. So who knows man, at this point I’d like to say our options are endless in terms of how its gonna sound. It’s still gonna be heavy, it’s gonna be fast, it’s gonna be, you know, we have a slow song kind of like “Who’s First”.

Okay.
Mike: I don’t know, kinda but different. We have, I don’t know, fast songs that are super heavy, that are really fast that’s stuff that we’ve almost never done before, you know?

Okay, that’s cool, I look forward to that. Also, you guys released your…
Mike: It’s not going to get any lighter.

Oh [laughs] for sure! How do you feel about your now mainstream success, if you will?
Mike: It’s weird, it’s fun though. Like it’s cool, like we just went to the Junos and stuff which was like, it’s awesome to be, you know, nominated for an award and like recognized. It helps with your parents [Spenny laughs] to see that sort of thing. But I don’t know, we all kind of grew up in punk rock and metal and stuff like that and that’s the stuff that I never liked. You know I was like “Fuck that! I listen to punk!” and bands that are on independent record labels and shit like that. Which is, you know, I guess you get older and realize that you can still have cred and be nominated for a Juno, I don’t know. We’re still touring in a van, we’re still punk rock.

I get it, yeah; well do you guys take the tour bus now?
Mike: No, our van, well, we’re not even here yet. [both laugh] Our van’s not here. No, we just, we did the whole tour in a van with a trailer.

Yeah, okay see, that’s punk rock, if you were in one of these tour buses behind us… no. [Laughs]
Mike: Nah! It’s still punk rock.

I guess so.
Mike: You know what I mean? I think as long as you know, stay true to some sort of your ethics and stuff like that is punk rock, you know, playing hard every night and then to whoever, you know?

Drinkin’ Rockstar [both laugh]
Mike: Drinking free Rockstar, you know, it’s like, whatever.

Yeah, for sure. Okay, a friend of Scotty’s wants to know what it’s like dealing with him now that he has a Blackberry.
Mike: [Laughs] I don’t know, it’s actually, it’s good because we’re able to get a hold of him. Yeah he’s a bit more receptive to our texts, BBMs you know?

I can’t mention her name for, ‘cause she told me not to, so we’re not gonna go that far. But I wish you the best of luck in Australia and everywhere else.
Mike: Cool! Thanks man!  [ END ] 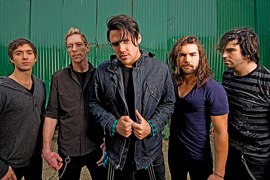 After Midnight Project: “Take This Band Home With You Tonight” 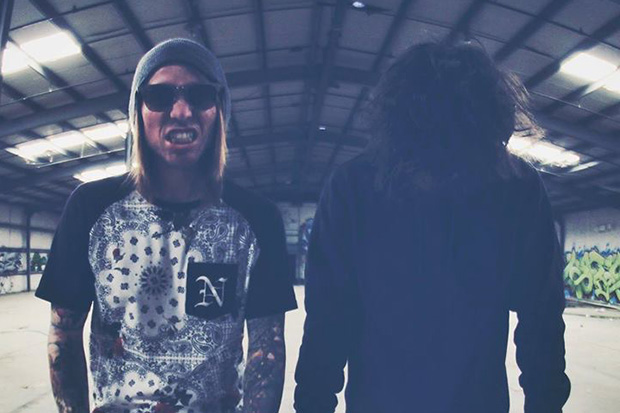