The Skinny: Now this band is sick! Born of liquor and dirt, Ball Harness emerged from a womb of boredom and an excessive desire to drive beers in J-Man’s Basement. The three piece juggernaut started rehearsing in July 2008 and immediately began making live appearances both out of town and in their hometown of Toronto, Ontario. Winter 2008, the band battled their worst hangover yet, shatting out the EP War Without Witness. Recorded at the Northern Stronghold and the Harness Room (rip) in Toronto, the band have delivered an onslaught of a record, featuring a special guest appearance from Al “the Yeti” Bones (Georgian Skull) and artwork by Joshua Marc Levy (AC/DC / Black Crowes). War Without Witness is the product of both fun and frustration, a paradox between a love of true, uncompromising rock music, and a disdain for the parasites who suck the life out of it and feed the rotten carcass to the masses, fuck ’em all… ROCK!  [ END ] 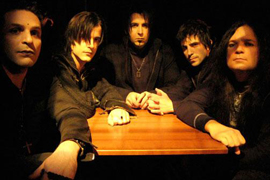