“Marvel not that I said ye must be born again. The wind bloweth where it listeth. Thou knowest not whence it cometh…” – Jesus to Nicodemus

During World War II, French director Robert Bresson spent over a year in a German prisoner-of-war camp. This experience led him to recreate the true story of Andre Devigny’s escape from the Prison de Montluc in Lyon, France in 1943. Although he had a long career, Bresson only ended up making thirteen features, as he never achieved commercial success.

Putting aside the metaphysical implications of the film, A Man Escaped is a prison-escape movie. In my opinion, it is the best prison-escape movie, and I am including The Great Escape, Le Trou, Down to Here and Shawshank Redemption. It is very different from these movies, however, in that it is singularly focused on the act of escaping a life in prison. There are no budding friendship, no witty dialogue, no quirky prison guards, no plot twists and no diabolical prison wardens. The film opens with a placard in Robert Bresson’s handwriting: “This is a true story. I’ve told it as it happened, unadorned.” We see Fontaine in the back of a car. A prisoner next to him is handcuffed to a Nazi guard. Fontaine is not handcuffed and we see him judging the best moment to make his escape from the car. A streetcar cuts off the car and Fontaine jumps out. In typical Bressonian style, the camera stays focused on the backseat of the car, however. We hear running footsteps, we hear gunshots. Moments later, Fontaine is brought back into the car, handcuffed to the prisoner next to him and pistol whipped.

Upon arriving at the prison, instead of giving in to his imprisonment, Fontaine immediately begins to plot his escape. We spend most of the movie inside his cell with him. This claustrophobia is increased for us, as Fontaine can look out his window, but we are not shown what he sees.

There is one sequence that typifies Bresson’s use of keeping action off screen and giving the viewer information only through the soundtrack. Fontaine has removed some wooden planks from his cell door with a chisel made from a stolen spoon. In order to remove the planks, a piece of his doorframe has to be broken off. He has removed two of the planks when he suddenly stops and we hear footsteps of the guards. Moving agonizingly slowly yet surely, he puts the planks back into his door and taps the broken doorframe back into place. All the while, the footsteps are getting louder and yet the camera does not cut to a shot of the guards’ boots as it would in any typical movie. The suspense is almost unbearable, but, because the camera lingers on Fontaine, we don’t really know how close the guards are and we are tied to the character in a much greater fashion than we would otherwise be.

Fontaine develops an elaborate escape plan, but he can’t bring himself to go, saying that it is “hard to take the plunge.” The pastor, a fellow prisoner, gives him a line of scripture in which Jesus tells Nicodemus that one cannot know when or how he will be saved. Fontaine’s prevarication ends when he is ultimately sentenced to death by the Nazis for treason and espionage, and so decides he must escape that night. To his dismay, a new prisoner shares his cell. The prisoner is a young Frenchman, François Jost, who has enlisted as a German soldier. Fontaine must decide whether he can trust this young traitor to the French cause, or whether he must kill him before he escapes…

Like many of his works, A Man Escaped serves the purpose of separating the language of cinema from the language of theatre. In his own words, Bresson states that “film-making is combining images and sounds of real things in an order that makes them effective. What I disapprove of is photographing things that are not real. Sets and actors are not real.” All the actors in this film are non-professional. Bresson would repeat each shot for multiple takes until the actors were no longer “acting,” merely doing what their character was required to do. David Fincher apparently used this technique in Zodiac.

As Bresson’s techniques have now been absorbed into the mainstream of filmmaking, it is hard to notice what made it so original in its time. Upon release, a critic and budding filmmaker, of whom we shall read more later, François Truffaut wrote about the new film, A Man Escaped. “What is striking when one sees the film for the first time is the constant contrast between what the work is and what it would be, or would have been, if it had been made by another filmmaker. At first all one sees are its deficiencies, and for a while one is tempted to redo the cutting and indicate additional shots so that the film would resemble ‘what a film is supposed to be.’” There is one particularly effective sequence in which Fontaine is waiting to kill a guard who is making his rounds just around a corner. We can hear the footsteps get louder and quieter. Fontaine must time his spring around the corner just right. When he does so, the camera does not follow and we are left to imagine and worry over what might be transpiring just around the bend.

Some have said that A Man Escaped is not really a prison-escape movie, but a metaphor for the mysterious process of salvation. Countering this, Bresson says this was not deliberate, and that intangible elements frequently end up in art without being intended. “What you call my ‘mysticism’ must derive from this: I tried to make the audience feel these extraordinary currents which existed in the German prisons during the Resistance, the presence of something or someone unseen; a hand that directs all.”

Up Next in the Film Canon: Snakes, Scams and Sturges. 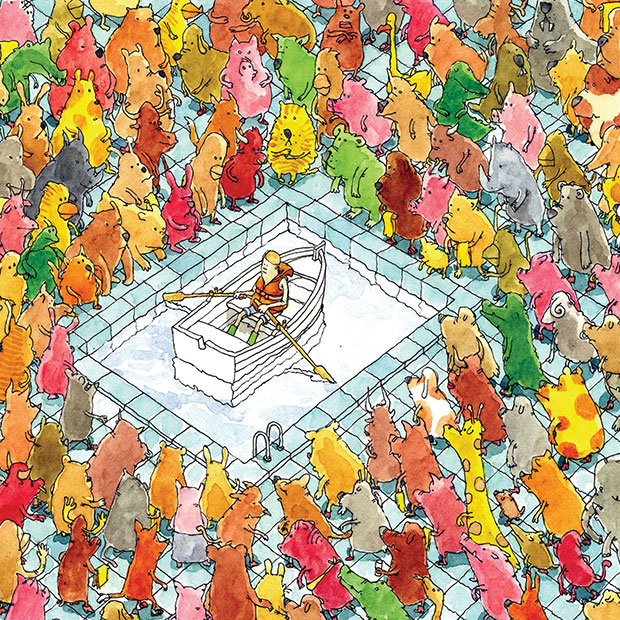