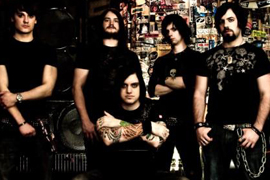 The Sammus Theory is a five piece rock/metal band based out of Phoenix, Arizona. They recently singed with C.A.M. Entertainment and released their debut album, See It Through on June 9th. Now with a national tour in the works it seems like this band, who have achieved much underground success since their formation in 2004, is close to receiving the national recognition they deserve. I had a chance to interview lead singer Sam Hughes (a.k.a. Sammus) about the new album, how the band formed and what lies ahead for them.

What instruments do you play?
Sam: I’m not currently active in a lot of the stuff, I played piano a lot, I still do here and there, guitar and bass, and I sing and I used to play drums, tuba and trumpet and trombone. I was a band geek.

Do you come from a musical family?
Sam: Not at all, that’s the weird thing, my parents weren’t musical or anything and my brother’s more visual art stuff, so it seemed to skip my parents and hit me. My grandpa used to play piano.

Tell me about how The Sammus Theory formed.
Sam: It was pretty much MySpace and Craigslist, you know, put out ads and everything, find people, and got a response from three more people who aren’t in the band anymore, it’s been swapping members and things to get to where we are today, I mean every time we need to find somebody to fill in, MySpace or Craigslist I think only one time one of the members brought a friend and it ended up working and that was with Nick, the bass player.

So you and Kyle are original members?
Sam: Yeah, and then Jeremy joined in 2007 so he’s been with it long enough, and he’s gone through a lot of the tough stuff that we’ve gone through, not really original but more so than the first guy was, ya know?

Makes sense. So did you move to Arizona right out of school?
Sam: I stayed after high school for about six months and saved up money then I moved down to go to school down here.

What school did you go to?
Sam: It’s called the Conservatory of Recording Arts and Sciences. My brother told me about it when I was 16 and eventually moved down so I ended up moving down. It’s like seven and a half months, it’s really quick, they get you in and get you out and then you’re pretty much on your internship.

So what bands or musicians inspire you personally and as a band?
Sam: Marilyn Manson was really the first crazy stage performer I saw, so I got into him big time as far as my personal influences. As a band it’s really anyone that’s got good energy on stage and as far as musically we listen to a lot of stuff so it’s really hard to tell where exactly it comes from. Heavier stuff, ya know?

Stone Temple Pilots because you cover their song…
Sam: Yup, there ya go.

Why did you pick “Sex Type Thing?”
Sam: Umm, I don’t know. We were like kicking around the idea of coming up with a cover and we were like, “well, let’s try it” and it’s a fun song to play so you can’t really go wrong with that, you know?

What label did you guys just sign to?
Sam: It’s called C.A.M. Entertainment.

How did you get hooked up with them?
Sam: It’s kind of meeting people at the right time kind of thing. Our friends in The Exies played here and we went to go see them and their friend Scott Stevens introduced us to Becky Hunt who is working for an Internet radio thing called KTravel and then Becky’s friend Doug out of Florida is the owner of C.A.M. and she introduced us to him. We’d never met him in person, it was the first time we’d ever met. We hooked in with management first and then it was like six or seven months after management contract that we signed onto the label, so it took awhile after we met Doug to do the label thing.

I have read that your song lyrics are very personal. Would you agree with that?
Sam: Oh yeah, definitely.

Where do you get your inspiration?
Sam: You know, with this album, my car crash thing. I got in a pretty nasty car wreck in 2005 and I’m still recovering from it. It knocked out my teeth and my car blew up and broke my back. It was pretty traumatic so I went through a lot of therapy and stuff and mental recovery. A lot of it is based around that. The theme of the album is overcoming that whole situation for me. So I tend to write lyrics that are personal to me but I keep it relatively vague I guess so it’s personal to me but other people can relate to it because you can’t really tell what it is talking about but I think a lot of people can relate to it because it sounds like something they’ve been through.

So tell me about your new drummer, Paul.
Sam: He’s got his shit together, he’s very professional and he fits in with us really well. We’re situated with the new drummer and we’re doing a full U.S. tour and everything so everything’s good.

How did you find Paul?
Sam: He’d actually been contacting our manager for like six or seven months going “hey, do you know of any good bands?” and our manager was like, “well, ya I do!” So he put us into contact with them and he was living in Boston so we didn’t meet him until it was like a month later but we’d had the whole phone conversations with him and everything for like an hour a day trying to get to know him. He just moved out, so we get to start practice and get ready.

Tell me about this tour, where are you going?
Sam: We’re doing Nevada and then we’re doing Montana and Idaho, Washington, Oregon, then back into California then we’re going into Texas and New Mexico and we ‘re going to hit all the Midwest spots and then we’re gonna go to the East Coast and then probably swing back sometime near the end of September. Our label wants to keep us out for about six months.

That’s a long time.
Sam: It’s gonna be fun. It’s definitely tough. There’s a lot of people who don’t understand the touring and the party scene and it’s like, go to bed late, wake up early, drive for hours, play a show, meet crazy drunk people and all that stuff. I would rather be doing that than like McDonalds or something like that though. It’s definitely fun but it’s a lot of work.  [ END ]