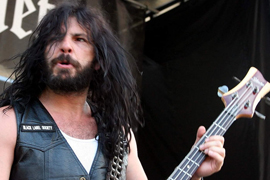 Multi talented musician John “J.D.” DeServio is pulling double duty these days, playing bass guitar for legendary rock/metal band Black Label Society and promoting his side project and original band, Cycle of Pain. The debut self titled album features 12 tracks of pure and simple modern rock and roll infused with overtones of funk and classic rock. I talked to J.D. about the origins of Cycle of Pain, who he would like to collaborate with musically, and what musicians have inspired him. Check it out!

So you play the drums and the piano as well as the guitar?
J.D.: Yup, I play everything.

Have you been involved with music since you were a kid, did you take classes and stuff like that?
J.D.: Um, well, I started really playing in sixth grade, that’s when I had my first bass and we had a band in high school and we just kept going and took some music theory in high school and some of my guitar players now and then would take lessons and they’d show us… but pretty much I learned in high school music theory classes and just listening to music all the time and then I went to Berkeley after that.

Cycle of Pain: So Cycle of Pain started way back before…
J.D.: Yep, we were like 15 and we were in a band together. Me, Joe and Greg.

How does it feel to finally be able to get your vision and your music out there from that original band?
J.D.: [Laughs].

I’m sure it’s awesome!
J.D.:Yeah, It’s totally amazing. I went up to this label and played them a bunch of my music and they loved it all, I had like a lot of bass stuff and jazz and funk and rock and metal and they said I could do whatever I wanted so I wanted to do the record with my guys so that’s what I did.

Was it hard to get everybody back together?
J.D.: Nah, it was easy. We’re good friends and have been jamming on and off ever since. Actually, me, Joe and Greg played in ’03 as a trio in Cycle of Pain. We did a couple shows, so we’ve been playing on and off forever.

Then you recruited Rich Monica from Tantric?
J.D.: Ya, he was my buddy, my drummer forever, and then he actually got in Tantric, so he was actually in my band first, but now he’s playing with Tantric, he’s not in my band anymore. But he did the record. I’ve got Bobby Pantella, he plays for Monster Magnet.

Oh OK, it’s amazing the way everybody knows each other in the music world.
J.D.: Yeah, it’s a small world.

On this tour you’ve been playing with Cycle of Pain and Black Label…
J.D.: Yeah, double duty.

I’ll bet!
J.D.: Yeah, and we show up to Vegas last night in the bus, right, and we got here and I just stayed in the bus until about 1. And then I came to my room and just fell asleep again.

So this album just came out, it is great by the way, I have been rocking it for a few weeks, do you foresee this band continuing and putting out more albums?
J.D.: I really hope so, I mean, it’s on the fans now. If it sells records and does well, I’m gonna try to continue to tour with them, ya know? So it’s really a contingency on how much we do and how many people really want it, but I’d love to.

So what is “Cycle of Pain,” what does that mean?
J.D.: It’s just life. You go through so much shit and it’s just a never ending cycle. And there’s a lot of pain obviously, a lot of things happen and there’s a lot of great stuff too, but it’s just really about enduring life. And that’s it.

You’ve had the opportunity to meet and perform with a lot of musicians. Is there anyone whom you have not worked with or met that you would like to?
J.D.: There’s a million, I’m such a big fan of so much music. Umm, I’d love to collaborate with just anybody, I mean, like I said I’m a huge fan, I have so many different influences in all kinds of jazz and funk and I could just name like 50. Ozzy, ya, that’s be great. That’d be fun.

So what kind of stuff did you grow up listening to?
J.D.: A lot of rock, classic rock, Zepplin, Jethro Tull, The Doors, Black Sabbath, and then like when I got into eighth grade I think Maiden came out and that’s when my mind was blown, when I heard Maiden and then I was into Sabbath already and then Ozzy came out with Randy Rhoads. Then when I got into college I got into jazz and funk.

So what does the future hold for you? Any other projects you are working on?
J.D.: No, right now I am just trying to get Cycle off the ground and Black Label’s my main gig. After this run I’m gonna try to go out and do some more stuff with Cycle of Pain and then I think I’m going back out on the road with Black Label in July. So I’m gonna try to do as much as I can with Cycle and see if I can get it some life. And that’s basically it.  [ END ]