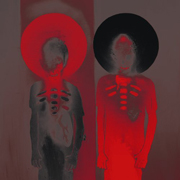 Not-so-good but relevant story: months ago, I heard a track on 102.1 The Edge that I knew featured Ian Astbury of The Cult, though it was a much more modern and slick track than you’d find on any Cult record. Anyways, I was keen on looking up who sang it, though when I went to do so, my internet connection was damaged. In an event that occurs far too often for someone my age that doesn’t smoke too much pot, I completely forgot about it. I slide in UNKLE’s War Stories to review earlier this week, and low and behold, there it is – “Burn My Shadow.” Score!

Since we’re there, I’d might as well start in the middle and work to the wings. “Burn My Shadow” is a killer track. Astbury’s vocal melody is just haunting throughout, with a terrific and sticky chorus that is ultimately what makes this the album’s standout track. Still, whether going forward or backwards, there are other great tracks to be found here. “Chemistry” is a pretty exciting track, especially considering it’s an instrumental number, that has a great twangy guitar melody accented and driven by a sharp share beat. “Restless,” another standout, features Josh Homme of Queens of the Stone Age offering some very chic and smooth vocals. Great song.

“May Day,” featuring The Duke Spirit, finds UNKLE attempting a more upbeat and poppy formula, and while the track isn’t bad, the band works better when in the ominous arena. Massive Attack’s 3D helps out on “Twilight,” which despite its very simple melody, develops quite well into a solid, easily-digested track. Astbury returns on the album closer, another winner, with some good string accents.

While I’ve focused mainly on the album’s highlights, too large a percentage of the tracks here lack the staying power of those like the aforementioned. Clocking in at over an hour, the album is perhaps too indulgent for its own food. UNKLE would’ve done well to trim a lot of the fat (entire songs) and kept to the eerie electronica that donates to this album’s overall success.  [ END ]