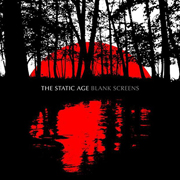 I never would have thought I would have to use the word Xylophone in a review, but guess what? The mighty instrument makes an appearance in the first track on Black Screens in the form of a keyboard. “Skyscrapers” makes me reminiscent of the Cure’s “Just like Heaven” and probably has to be one of my favourite songs off the 9 track album. You can hear so many different influences on this record: “Cherry Red” makes me think of The Police and “Message in a Bottle”. It’s not a bad thing though; I like being reminiscent of the past and infusing it with new melodies and riffs. For every song off the album, I can think of an 80’s counterpart.

Most of the tracks have undeniable synth sounds to them, but as a whole, it fits as part of the bands style. The whole album is moody, and soothes the ear with purring vocals and gloomy lyrics. “Count the Dead” is a catchy, and inviting and makes me think new wave is how I want to peg this band. I enjoyed the album, only because this is what I like to listen to from time to time. While it all seamlessly flows, the closing track isn’t what you might have expected, it’s dominated by melodies and minimal lyrics.

For the music snobs out there, don’t try to reach for this album, you’ll think of way too many comparisons and want to call up anyone and everyone to bitch them out. I think this band has a great way of re-visioning old music and fusing it together with new twists and sounds. It’s a very different record in one aspect, but in another has the comfort of familiarity.  [ END ]