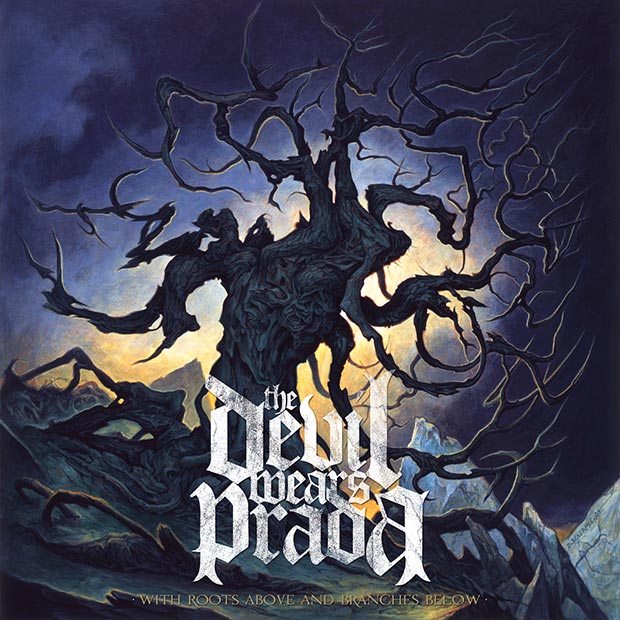 Fans of the Metalcore band The Devil Wears Prada rejoice! The band’s eagerly awaited new release, With Roots Above And Branches Below, does not disappoint. This is the band’s fourth full length disc and while it retains their unique Metalcore sound, thanks in large part to the vocals of Mike Hranica, their maturity as musicians and songwriters is plain as the nose on your face.

As one would expect from a record from The Devil Wears Prada, this CD is extremely heavy, maybe even more so than their previous releases. However, the band manages to weave a melodic thread into almost every track whether it is a melodic guitar part or the sporadic inclusion of some cleaner vocals; the effect is noticeable and effective. Good examples of this can be found in the tunes “Dez Moines” and “Ben Has A Kid” (cleaner background vocals) or “Big Wiggly Style” and “Gimme Half” (very cool melodic guitar lines).

“Louder Than Thunder” is a complete departure from the rest of the disc with it’s incorporation of acoustic guitars, strings and a clean vocal melody that almost becomes ethereal at times and showcases the bands ability to write a variety of great songs, not just heavy tunes.

Another item worth mentioning is the fact the band still maintain their sense of humor by titling their songs with peculiar, at times downright amusing song titles. With songs titles such as, “Assistant To The Regional Manager,” “Big Wiggy Style” and “Wapakalypse” it is hard not to at least chuckle when you first read them.

Many bands fade into oblivion after their second release but with The Devil Wears Prada they have avoided the sophomore slump and produced increasingly better records. With Roots Above And Branches Below is a solid release from a band that has fully come into its own proving they are a force to be reckoned with.  [ END ]