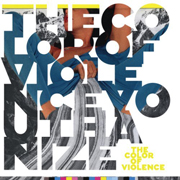 The Color Of Violence

I can think of too many records where the opening track is my favourite, and it’s not so much by chance. After all, any given album’s kick-off track is supposed to open the album on a high note, giving a taste of what’s to come while – at least in the case of heavy music – opening with the intensity high. Makes sense, right? When I tell you that I was quite disappointed with “Rock Music,” the opening track on The Color of Violence’s Youthanize (and a cover of a decent Pixies track), you’ll understand why I was instilled with pretty low hopes for the rest of the album. Like anyone, though, I enjoy a pleasant surprise, and am pretty pleased with what followed despite the poor initial indicator.

If we pretend the opener doesn’t exist, however, what we have on our hands is a more-than-competent screamo/grindcore record with tinges of melodic post-hardcore mixed in for good measure. A little front-heavy, the album offers a slew of successive tracks that provide the aural experience of an epileptic seizure (though, pretend such an experience is an enjoyable one). “Large Hardon Collider” boasts lots of spastic pulsation with plenty of shifts in tempo and groove. “God Gave Me Deeze Nuts” keeps the vocals varied with hints of what The Blood Brothers did well on their first two albums, and “Youthanize” keeps the intensity high with what I’d dare call catchy guitar melodies.

The album loses a bit of steam during it’s second half, though the notable guitar lines keep up for the majority of the tracks. The album’s standout comes on this weaker side in “Crapdemic,” which features a huge build-up in intensity and a totally vicious ending. The song is the equivalent of watching a flame chase a stream of gasoline, climaxing in a destructive engulfment of flame – truly special. The albums last two tracks are somewhat lacklustre, bringing nothing new or memorable to the table, though the secret track is a fun listen.

Producing something in between of what The Number 12 Looks Like You and United Nations both accomplished with full-lengths over the last 12 months, plus a little more vocal variety, The Color Of Violence have produced a pretty cool debut. Other than some lame song titles and a formula that, while explosive, carries an expiration date, there’s not much to complain about with Youthanize (other than the fact they’ve spelled “Color” incorrectly).  [ END ]