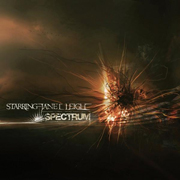 I found the latest release from Starring Janet Leigh to be quite interesting. For while Spectrum is a full on Death Metal album it has quite a lot of unexpected tempo changes and instrumentation that, for me at least, made me want to listen to more.

All the elements of a classic Death Metal disc are here, the brutal wall of sound, the traditional guttural vocals as well as tons of speed; and I mean tons of speed. However, as previously mentioned the band adds another dimension by weaving in clean guitar breaks and sections that have an almost jazz feel about them. Seemingly out of nowhere the band stops on a dime and transitions into more cohesive, slower tempo passages. Granted I first thought this to be odd but then I found myself anticipating more of them. A good example of this is the title track where after about a minute of abrasive and in your face metal the song segues into a cleaner mellower passage, but the respite does not last for very long before the band is back quickly, grabbing the listener by the balls.

Another good example of this is seen throughout the tune “Mistress”, which has numerous tempo changes and breaks that are welcoming and interesting even while seeming out of place.

Spectrum is unbelievably heavy and extraordinarily fast and incredibly pissed off. Fans of the Death Metal genre will truly dig this album, it is one of the better ones that I have heard in this genre this year if for no other reason than at least Starring Janet Leigh have thought outside the box by adding a bit of unexpected variety.  [ END ]