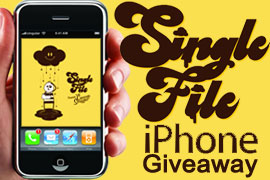 Brief Bio: “The title Common Struggles says it all – I’m not pretending that any of what I’ve dealt with is new, it’s just the human condition,” says lead vocalist/guitarist/bassist Sloan Anderson, explaining the choice of title for Single File’s full length debut album, which was produced by Howard Benson (My Chemical Romance, The All-American Rejects, Less Than Jake). While there is undoubtedly a universal quality to the Denver-based rock trio’s story – that hard work and unswerving dedication to one’s craft can pay off, particularly when combined with a little luck – it’s probably safe to say that most people don’t spend a big chunk of their twenties tooling around the U.S. in an RV named Maggie Mae and nipping into gas stations to fill its water tank before the attendant catches on. “We were little pirates, just living in this crappy RV,” says Anderson. Colorado power-pop trio Single File may have just dropped their debut full-length, Common Struggles, on the world but that doesn’t mean the band is ready to stop delivering the goods.  [ END ]

Prizing:
Single File and PureGrainAudio have teamed up to give away an iPhone to one very lucky winner. The sweetest cellular device to hit the 21st century will come loaded up with Common Struggles featuring the songs “Girlfriends” and “Mannequin Loveseat”.