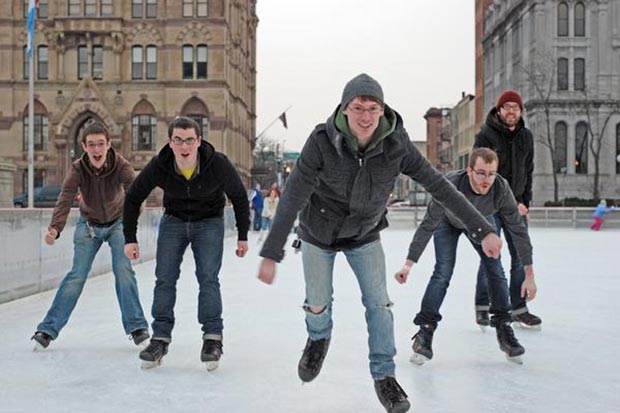 With: Have Heart, Trapped Under Ice, Fortune Teller & Bad Choice. “Damn Queen Street traffic!” I said to myself as I glanced at the time on my phone. I was heading westbound on the 501 and I knew I was going to be late, though I hoped the first band had been delayed at least a little. Finally, I heard the announcements proclaim that the next stop would be Bathurst so I pulled the “dinger”, if you will, and headed for the front door of the street car. Of course my thoughts of this being small show, being a Monday night and all, would soon be shot down, I entered the doors of the Kathedral where I found the room packed, I checked in and being my 20th birthday went straight for the bar.

It turns out that I had missed the first set, a band called Bad Choice. After a quick search for their MySpace page I found that the only 2 songs they had up were live recordings from this show. So in that sense I didn’t end up missing their entire set I guess but I want to check these guys out live before I make a full judgement.

The band that was playing when I arrived was already into their first couple songs. They had a nice old school sound; it’s what I’m into, no complaints from this guy. Definitely looking forward to catching another set by these guys, they were called Fortune Teller. They did their thing and are apparently from Toronto, are there a bunch of hardcore punk shows going on that I don’t know about? I have to check these out if there is, someone let me know!

The next band was Trapped Under Ice; these guys were wicked and had the crowd moving. They’re definitely worth checking out if you’re into Wisdom In Chains, old Madball and stuff like that.

Finally it was time for Polar Bear Club! I didn’t know where these guys fit in with the rest of the bands at this point, but they were awesome the first time I saw them back in November with Cancer Bats and The Holly Springs Disaster and I wouldn’t be disappointed for my second time seeing them. They have this awesome stage presence and ability to get my head moving to their music. It’s like a magnet for your ear, they play, you hear, you move close to the stage and watch the magic. Although most of the guys I was hanging out with weren’t there to see them, it seemed a good portion if not most of the crowd was into them and right up front singing along. The guys from The Artist Life even came to check them out. When I first saw Polar Bear Club they were playing at the Mod Club, a much bigger venue then the Kathedral, I’ve definitely noticed that between these two shows they somehow manage to play with a variety of bands and have a crowd that’s there just to see them! If you like Hot Water Music these guys are definitely worth checking out, same sort of hard-hitting, energetic and catchy sound, these guys are awesome all around. Okay so that rhymed, whatever, move on and don’t forget to catch PBC live and I don’t mean the Public Broadcasting Channel.

Last band of the night, Have Heart, these guys were pretty cool, they had this cool sound that seemed to be a combination of Quicksand and Hot Water Music if they had a child that was heavier then both of them, damn elephant kids. I enjoyed these guys, to the best of my memory of course, it was my birthday after all and that statement should speak for itself. I checked out their MySpace afterward and definitely love it. After I heard these guys it was more evident as to why PBC was on this tour.

Overall it was an awesome way to spend my 20th birthday! Awesome bands and awesome friends! The Fitzpatrick Incident, A Distance From… The Artist Life and even Shamus from Hostage Life were there, you have to agree with them, if not just me alone, that the bands playing were worth a listen. To close, I’ll say that you should definitely check out any of the bands that played, especially Polar Bear Club and Have Heart, seriously, have a heart; they’re in a club with polar bears… badoomcht!  [ END ]